The first time I heard about Sunshine Chicken was through Babe In the City-KL. It was she who introduced and then invited me and some other food bloggers, on behalf of Sunshine Chicken to a sumptuous lunch at Kedai Makanan Chef Tam in Selayang. That occasion was to showcase Sunshine Chicken’s chickens, of course, as well as some other dishes courtesy of Jin Chwan Seafood prepared by Chef Tam. Sunshine Chicken has a farm in Kuala Lipis where their chickens thrive on natural food and fresh air & water and generally have free run on the hilly grounds of the farm. Therefore, is it at all surprising that these chickens taste totally different from the usual market chickens, with their superb flavour and distinctly succulent meat texture!

I remember when I was a kid growing up in Ipoh, my mom used to rear chickens in the backyard. I remember that one of my tasks then was to feed them – mixing their feed with water before dumping it into their feeding troughs. We bred them for their eggs (it was fun picking up the eggs among the dirt & chicken poo – yeahhh!) and meat, of course! And a few months before “Koh Toong” (Winter Solstice, which is 1 month before Chinese New Year), this skinny old guy would come pedalling on his trusty-rusty bicycle to “yim” the cockerels in our brood. “Yim” means to castrate – and that fella did it with some thread and a small sharp knife, I remember. And the funny thing was – these cockerels would be just fine & dandy after the “surgery” – like nothing happened, no downtime at all! Yeah, cocks are hardy creatures eh! (LOL!). Anyway, these castrated chickens – “yim kai” (are they even cockerels now?) will then grow and grow and by Koh Toong and CNY, we would be feasting on these giant fowls – I remember we always had slabs of these poached yim kai in the fridge which would last us at least a week after! Mind you, those yim kais could grow into huge birds – at least 5kg in size!

But then sad to say, yim kais seem to be a thing of the past or maybe only available in the smaller towns because once I migrated to KL, I have never had the chance to come across them. Until Sunshine Chicken came along – yes, they do have them on their farm! And when I heard from Babe that this will be featured in the lunch – boy, was I excited! I mean, come on… the last time I ate yim kai was like, decades ago!

Do go and read about how yim kais come about in Sunshine Chicken’s website – the caponisation (castration) and the time taken for them to mature so that their meat will be at the best flavour and texture. Do contact Gerald at 016-662-0105 for orders/queries! 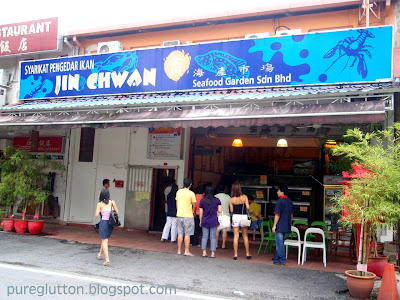 OK, I digress too much – let’s get back to the review. Before the lunch started, we took a short walk over to Jun Chwan Seafood Garden a few doors away from Kedai Makanan Chef Tam. The moment you step into the shop, you will be greeted by tanks and tanks of live seafood… the exotic ones ranging from geoducks, japanese snails, moray eels, deep sea garoupas and all kinds of fishes – can’t remember all their names! 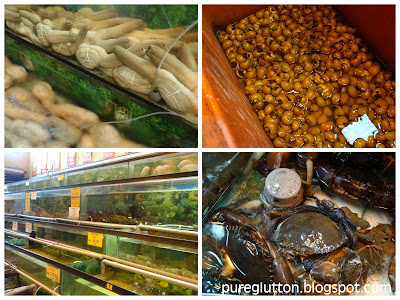 After the “familiarisation tour” at Jin Chwan, we made our way back to the restaurant, our tummies already growling, hehe! 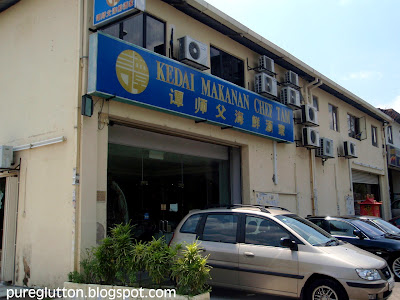 First dish to arrive was this plate of humongous Canadian Oysters! 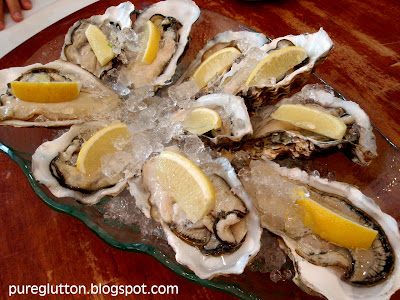 Just look at the size – and these cost only RM4.80 each at Jin Chwan! Squeeze a slice of lemon and add a dash of Tabasco Sauce on it….ohhh…. heavenly!

Now you see it… 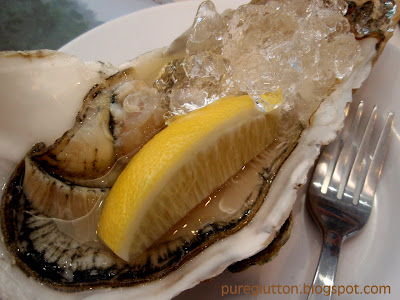 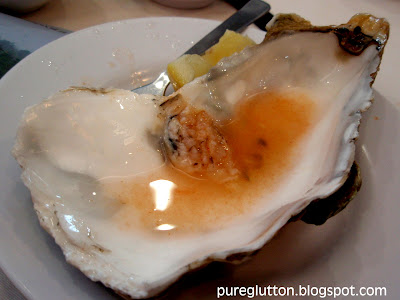 Next, the STAR of the lunch…. definitely is the Steamed Yim Kai! 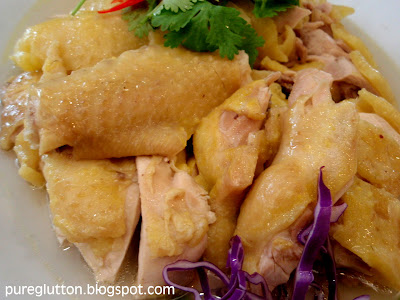 Served with the yim kai were these delighful spoonfuls of authentic chicken-flavoured steamed Sinchiang rice. The grains were round, fluffy, with an almost-glutinuous texture and totally infused with the juices/essence from the steamed yim kai! The rice was so flavourful you can actually just eat it on its own! 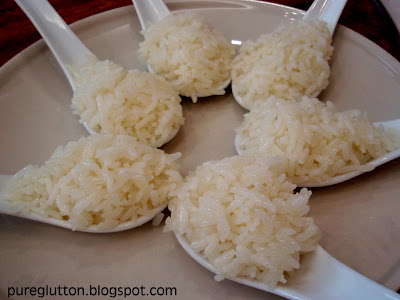 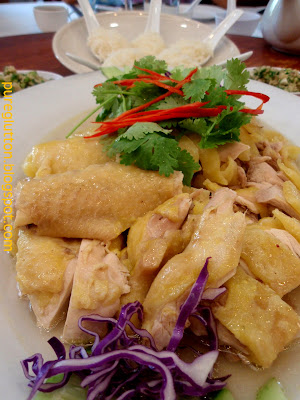 You can see the lovely yellow skin of the yim kai – a result of their special corn feed…. the meat texture is certainly more chewy than the ordinary chicken you get from the market… the more you chew on it, the more you taste the authentic flavour and aroma of real chicken. LL declared that was really the best chicken he had tasted and I couldn’t agree with him more! 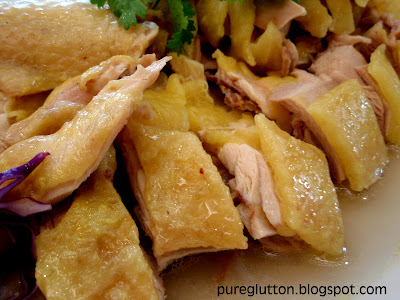 This was my portion – don’t touch! 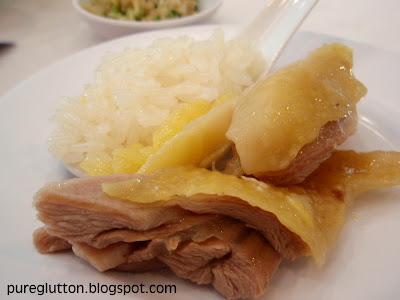 After we have polished off the yim kai, this beautifully steamed Aussie Jack Pearl fish was placed on our table. The sweet fine texture was enhanced with some superior soya sauce which brought out the superbly fresh flavour of the fish. At RM98 per kg, the price is indicative of the top-notch quality of this fish. 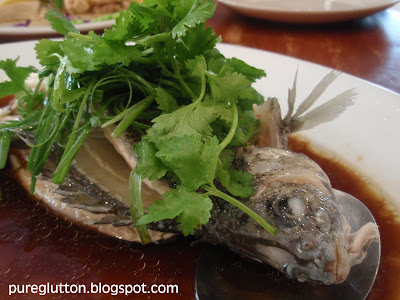 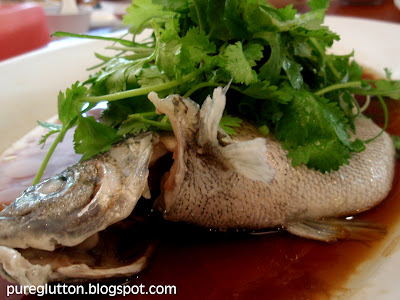 Cheese-baked Japanese Snails was next. The de-shelled snails were overwhelmed in the huge platter of cheese and unless you are a cheese fan, you may find this a bit too cheesy! 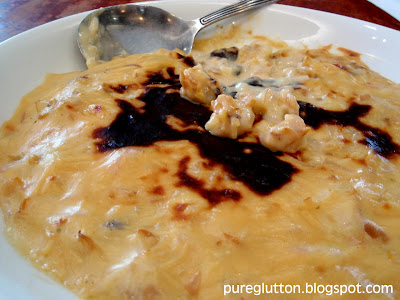 Sunshine Chicken showcased their Free Range Chicken in the next dish – Roasted Ma Choe Kai! Ma choe kai – literally translated to mean “horse grass chicken” – and that’s exactly what it is: chicken which fed on horsegrass in the free range farm. 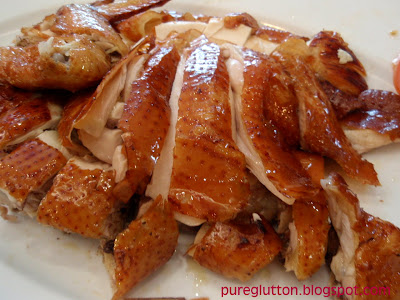 This superbly roasted chicken truly showcased the chef’s skills… from the almost-paper thin skin to the well-marinated meat. 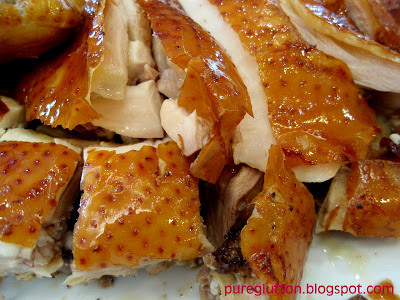 To get that crispy paper-thin skin, the chicken has to be hung dry (for hours!) before being roasted in the right temperature for the right amount of time… 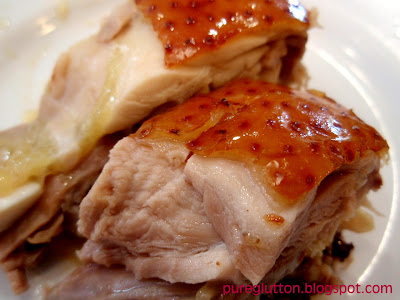 Just look at that yummylicious glistening golden-brown skin…. utterly delicious when eaten with a dollop of ginger+spring onion dip! 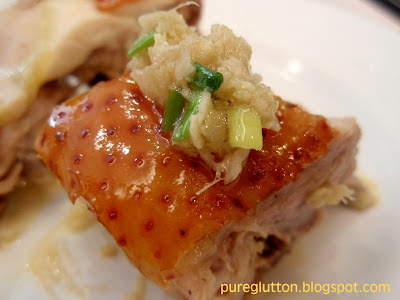 The next dish was Braised Tofu on a bed of baby kailan (choy tam) – perfect blend of protein and fibre! The tofu was very smooth and soft – clear indication of “homemade” stuff – another show-off dish from the chef, hehe! 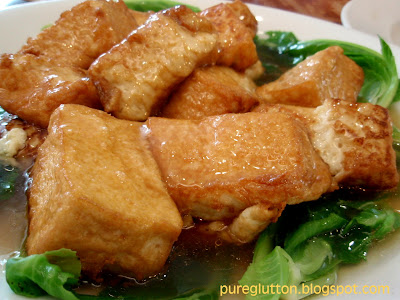 More fibre… Pea Shoots lightly saute’ed in garlic… plain, simple… just how I like my veggies! 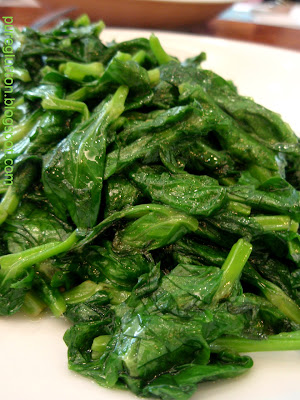 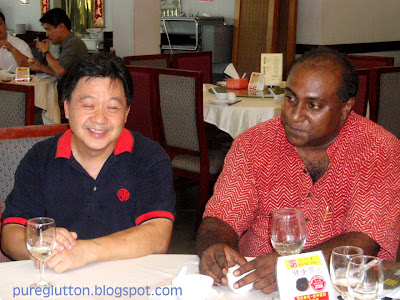 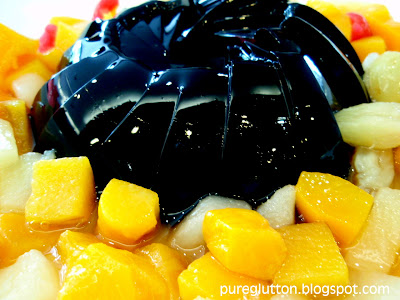 It was a very pleasant outing for me, despite making a wrong turn looking for the place and eventually “rescued” by Babe & Captain Hook, haha! It was great catching up with some of the floggers, besides Babe (thanks for the white wine!) – Lyrical Lemongrass, FBB, Nomad Gourmand, Ciki… and meeting for the 1st time Cumi, Just Heavenly Pleasures, Tham Jiak and Gourmet Garden (from Penang).

And thanks to Gerald for having us… 🙂 >>> have cooked the ma choe chicken at home, hainanese-style – it was gorgeous! Will feature it in my next blogpost!