With the dawning of a new year just days away, it’s timely that the menu at Rama V has some new breaths injected in it. The beautiful and luscious grounds surrounding this Thai fine-dining restaurant never cease to delight me and I can always look forward to an exceptional dining experience in Rama V. A couple of weeks ago, we were invited by the owners, Andre Shum and Danny Jee for a pre-Christmas gathering, together with their lovely better halves. It was a great catch-up session and also a chance to check out some new dishes on their menu. Rama V is now helmed by Chef Paphatson Singhakhat, fondly known as Chef O, who used to run the kitchen of Fa Ying, their sister restaurant in Paradigm Mall. The smiley soft-spoken Chef O has come up with several new items to add on to the menu and yet still retain Rama V’s signature popular dishes. Oldies but goodies like their iconic violet coloured Chor Ladda (RM24) …flower-shaped dumplings stuffed with minced chicken and peanuts and traditional Thai Hors D’oeuvres – Mieang Kam (RM22) remain firmly in the menu. 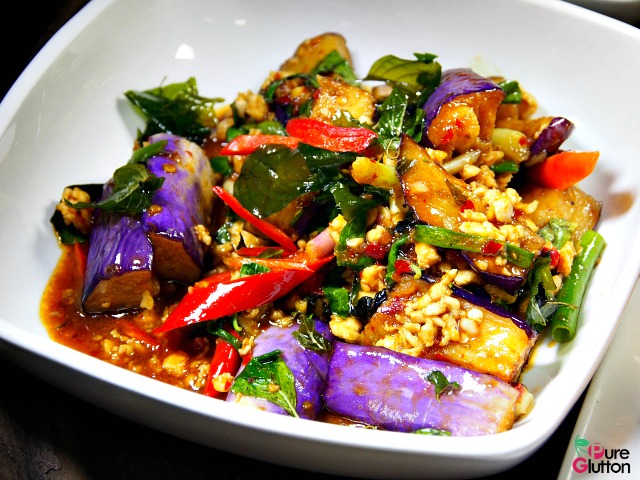 My favourite is the tweaked Som Tam (Papaya Salad) which now has wedges of salted eggs added in. Now known as Som Tam Khai Kem Rama V (RM24), it’s an excellent appetizer as the salted egg adds a most interesting dimension to the tangy crunchy salad. Green Curry is a staple in any Thai restaurant but Chef O has gone one step further by using Fish Paste stuffed with salted egg yolk instead of meats. Known as Gaeng Kiaw Loo chin Pla Yad Sai Khai Kem (RM28)…these are immensely good as the bold brash flavor of the salted eggs blends well with the spices. Chef O’s Seau Rong Hai (RM40) has a rather sad note to it – it means “The Tiger Weeps” and it’s actually Thai-style Grilled Tenderloin Steak served with Tamarind Sauce – a speciality from the Isaan region. Perhaps it was meant to explain that the steak was so tasty the tiger wept in wonder? The fact is, this is one helluva delicious steak with a superb blend of spiciness and tanginess from the tamarind sauce. The Pla Chon Luw Sauw (RM70) made a grand and dramatic appearance on our table. A whole deep-fried King Fish (freshwater snakehead) curled itself seductively amidst a pile of Thai herbs, chopped chillies, onions and crunchy cashew nuts sprinkled with lime juice. Looking rather menacing, the tender flaky texture of the fish soon won us over (as long as you don’t peer too long or closely at the fish head!) A dozen or so of Hoy Nang Rom Sod (Fresh Australian Oysters with Manow Sauce – RM28 for 4pcs) would go perfectly in between sips of the soup. Rama V now also offers Thai Barbecue on its menu – guests can select from a variety of fresh seafood to be grilled. The winning touch comes from the delicious dips. The huge Kung Mea Nam Yang (BBQ River Prawns) were served with a piquant Manow and Seafood Sauce which I couldn’t have enough of.