The air-cond in my office is running in full swing and before noon, I was already feeling the hunger pangs. So it was just as well that at 11.30am, LL called to say that his class ended early and that he was coming over to 1U for lunch. At my suggestion of having something porky, LL’s eyes sparkled up… and that’s how we ended up heading for Dave’s.

I have passed by this place many times but have never gone in to try their food. Just this morning I was reading some reviews of this place and I thought, with LL as lunch companion, this would be a good place to try.

My first impression of the place was that it’s too dim. Good for lovers out on a date…hmmm… I’d prefer to be able to see my food clearly while dining in a restaurant! Better lighting helps with the photography too, if you know what I mean.

Flipping through their somewhat tattered menu (some of the pages were falling off! or maybe I was just unlucky to get one in that state!)… recalling what one fehmes blogger raved about their Pork Belly Shavings (RM18), we decided to have that as a starter. 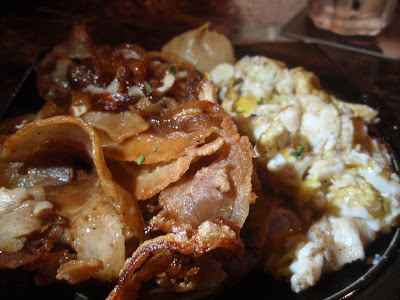 The menu said it’s served with Scrambled Eggs. However, as you can see in the pic, that was definitely not scrambled eggs – the yolk and white were clearly not mixed, as what good scrambled eggs should be. It was just fried eggs, ok. 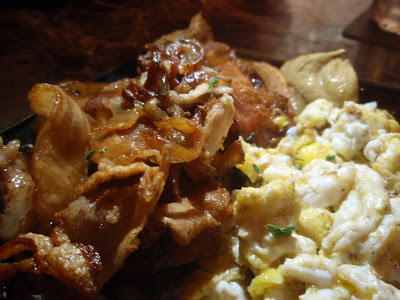 The “pork belly shavings” were nothing more than thin strips of bacon, fried till crispy and topped with a forgettable & undiscernible brown gravy. The portion served was quite miserly too. So… I would say this was rather disappointing, contrary to what that fehmes blogger reviewed.

I ordered a regular-sized Aussie Pizza (RM31) to share with LL. Now this was definitely much better than the disappointing starter. The thin-crusted pizza was topped with generous helpings of ham, bacon, anchovies, olives, onions, fresh basil and oozing with melted mozarella cheese! I would say the “regular size” was also generous – more than enough for 2 people. 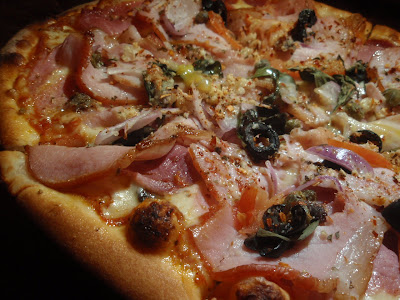 It was served in an oval plate and I had 3 pieces of it – and that already filled up my tummy! Needless to say, the rest of the pizza was polished off by LL, smacking his lips. 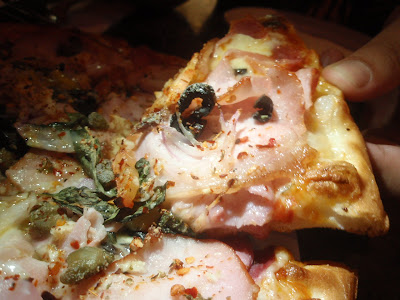 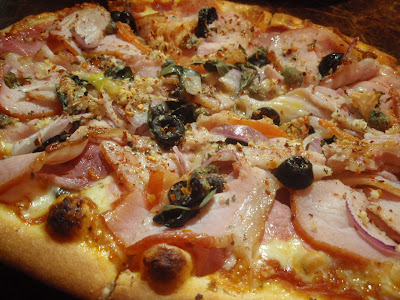 After that yummy pizza, I hardly had any more stomach space for LL’s ultimate lunch – the Pork Knuckle (RM51)! It was not an overly big piece of knuckle (for that price) but the side dishes of mashed potato, salad and pickles were pretty complete.

I liked the purple cabbage salad – it had bits of fried bacon sprinkled on top. The skin was super crispy and the meat was well marinated. I took a few nibbles of the meat and my only complaint was that the gravy served with it was really not up to par. I think Dave’s has a problem with making sauces/gravies – they’re nondescript and tasteless. I can do much better gravies! 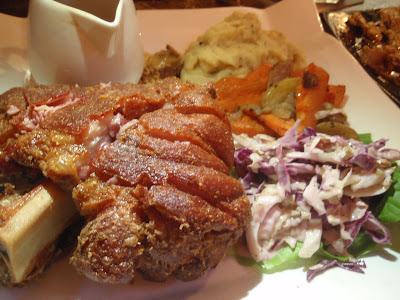 This is the end-result of the Pork Knuckle… 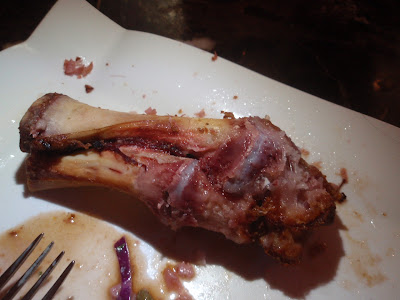 Oh by the way, they charge RM1 for a glass of plain water. All in all, lunch for 2 persons today cost me RM117. 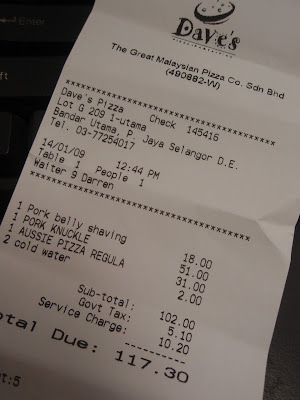