The last time I went to this restaurant was quite some time ago – when it first opened. At that time I believed we just had a quick unmemorable meal as the restaurant then was quite deserted.

However, of late, this place has been packing in the crowds. Probably they had a change in management and/or chefs. So last week, we decided to give it another try. On a week night, the crowd was pretty decent – almost 70% of tables were occupied. As its name suggests, their forte seems to be catches from the ocean!

1st dish we had was their Claypot Curry Fish Head, as this seemed to be a popular item. For a small portion (RM25), the pot brought to us was huge – for 3 persons! When I saw the pieces of fried fuchook in it, I was ecstatic as that’s my favourite! There were also long beans, okra, brinjals, tomatoes and onions all swimming with pieces of garoupa head in the fragrant concoction. The sour and lemak elements of the curry were perfectly balanced – however, our complaint was that it was super-fiery hot (so pedas!). They should tone down the chilli factor a bit and then this would be a perfect curry. Nevertheless, it was good to go with rice, although we had to have lots of ice water on standby! 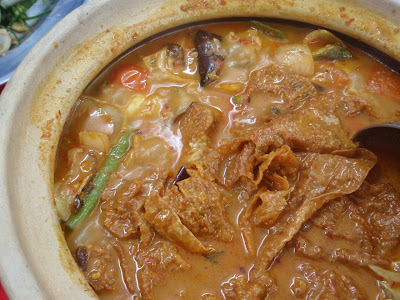 To calm our tongues from the fiery curry, we had the Japanese Taufu (RM6). Steamed plain and topped with chopped dried shrimps, shallots and spring onions, it somewhat refreshed our taste buds after the onslaught of the curry. 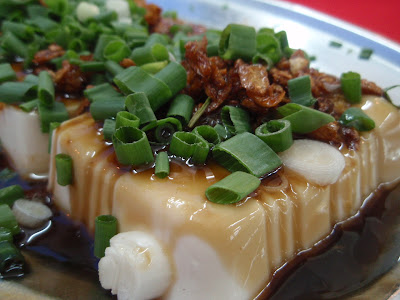 Our vegetables dish was the Chives with Intestines (RM13). Not many restaurants serve this and whenever we come across one that does, we almost never refuse this! The chives were lightly tossed with the crunchy intestines, thus retaining their nice green colour and were juicy to the bite. 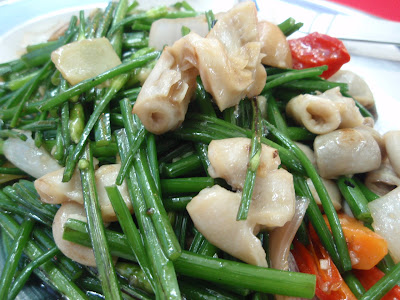 We also tried their Marmite Pork Ribs (RM13). Juicy succulent ribs were well marinated, fried to seal in the flavours and then tossed in a sweetish marmite sauce. Pieces of cucumber and onions gave the added crunch to the dish. Together with the curry, this went very well with white rice. 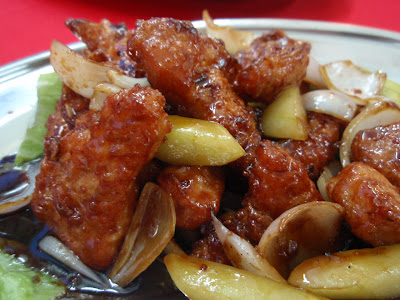 All in all, this place serves simple home-cooked-like dishes and that’s what had been packing in the crowds. Folks in Kota Kemuning do not have that many restaurants to go for such dishes. Besides rice, they also serve seafood porridge and noodles – I saw numerous tables ordering those. I will definitely go back to try those.