Din Tai Fung Restaurant
Lot LG-207, Lower Ground Floor
The Gardens, Mid Valley City
Kuala Lumpur
Tel: 03-2283 2292
Much has been said about this latest Shanghainese Tim Sum joint that has recently opened. On a late Tuesday morning, the place was pretty full when we were there. But that’s probably because it was filled with shoppers from Selangor since it’s a public holiday for Selangor! 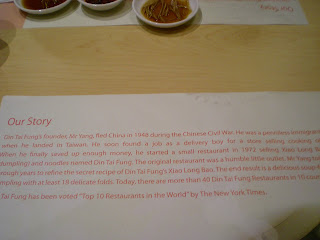 The “Story” of the Din Tai Fung chain of restaurants was printed on the paper placemats for diners to read while waiting for their food. Apparently it was founded by a poor Chinese dude in Taiwan and he became successful selling his siew-loong-paus. Seems his restaurant has been touted as one of the Top 10 Restaurants in the World by The New York Times. I think the New Yorkers are not very familiar with shanghainese food. 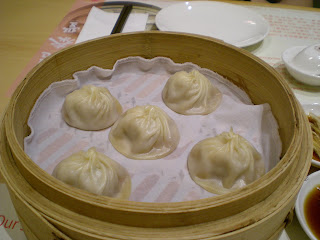 The Siew Loong Pau was RM11 for a basket of 5 – pricier than Dragon-I. However, it didnt even match up to the taste and quality of the latter. The soup in the dumpling was lacking, both in terms of quality and quantity. Nothing much to shout about. 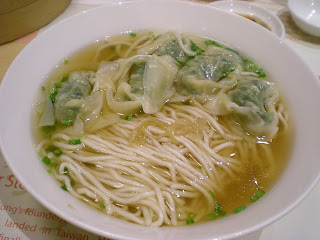 I had their La Mien with Vegetables + Meat Dumplings – minced pork with chopped vege, essentially. I found the texture of their la mien lacking in elasticity and the dumplings were pretty mediocre. That bowl of soup noodles cost RM13. 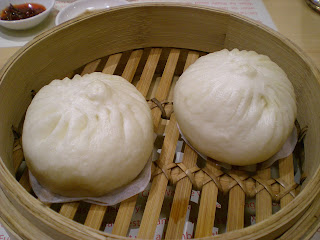 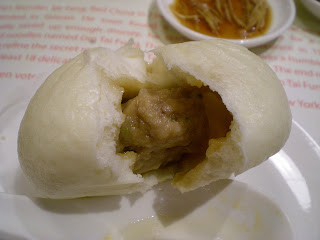 The pork in the bun
Two pieces of their Pork Bun were served in a basket. I have tasted much better Minced Pork Buns (sang-yook pau). The pau pastry was not fluffy enough and the meat filling inside was quite tasteless. Besides being a bit saltish, I could not distinguish any special flavour in the minced meat. 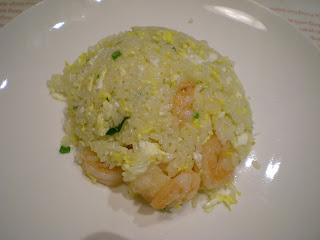 LL just had to have his fried rice, so we ordered the Shrimp Fried Rice. It took a very long time for them to serve this and when it finally came, it looked pretty plain & bland. There was absolutely zero garnishing and the serving was rather small. The rice was just fried with 7 medium-sized prawns, a sprinkle of long beans and eggs. At RM14, this was disappointing, considering the small serving. 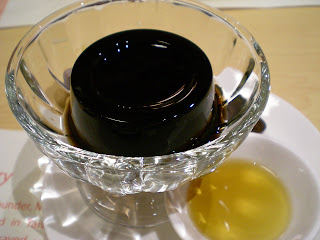 Of course LL had to have his Kwailin-ko dessert as well. It came in a dainty glass goblet and at RM7, that’s really not worth it. According to LL, it tasted just like any other black jelly and he has had better.

I would say there are other much better value-for-money shanghainese fare elsewhere. While service here was tolerable, their menu was pretty limited. I’d go to Dragon-I any day!