Part of the Tai Thong Group, this restaurant offers mainly Cantonese fare in a comfortable setting. As you step into the cream, beige and brown environment, you are greeted with this deco: 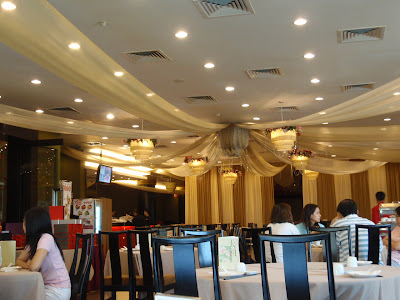 Lush drapes float across the ceiling in a cluster of chandeliers… 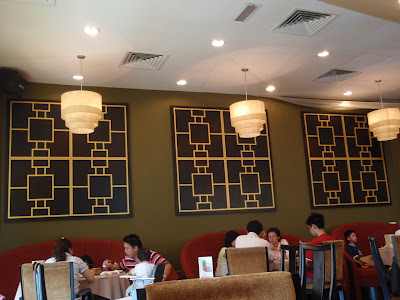 One side of the wall has this chinese motif wooden plaques adorning it and they have a few tables there with some comfy divan-like sofas – perfect for lounging in, especially when you are there for a long lazy brunch… just like we did the other Sunday morning…

We took a variety of Dim Sum from the trolleys…some were great, some were mediocre… 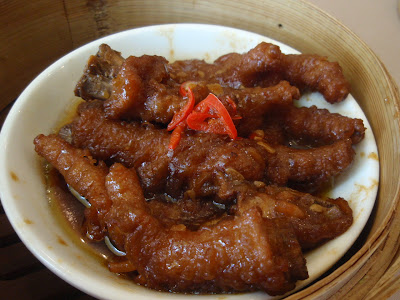 The Loh Mai Kai looked impressive – the grains of glutinuous rice had been well-steamed till they almost merged together… however, they lacked in the taste department… so, I would classify this as “mediocre”… 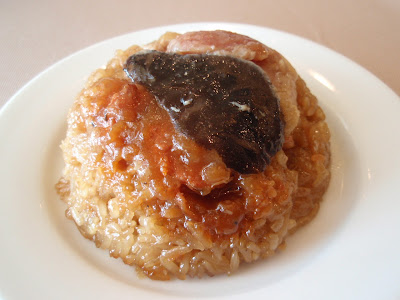 This artistic-looking Fried Shrimp Springroll was very good – LL’s favourite! The springroll skin was thin & crispy and the shrimp filling was super fresh, springy and all… 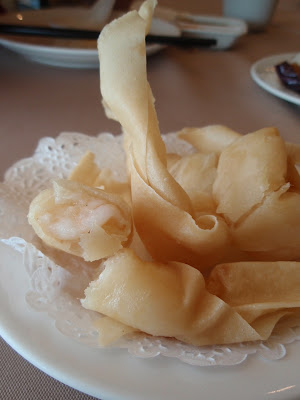 Ahhh… this Mango Shrimp Roll was another masterpiece – it was such a hit with LL that he had to order a 2nd plate! I dunno how they did the batter but it was light & fluffy, perfectly encasing the superfresh shrimp and plump mango inside. It looked almost as pretty as the doillie paper on the plate, don’t you think? 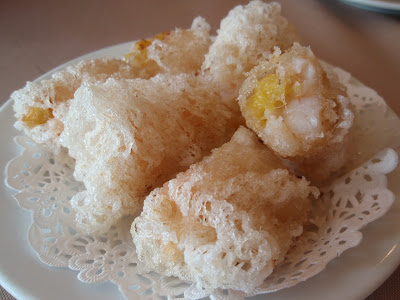 As I love yong taufu in any form, I couldn’t resist this plate of Stuffed Brinjals. I liked it – the fish paste was well-flavoured and the brinjals were fried crispy on the outside but perfectly tender inside. A light oyster-based gravy was drizzled over it – yumm! 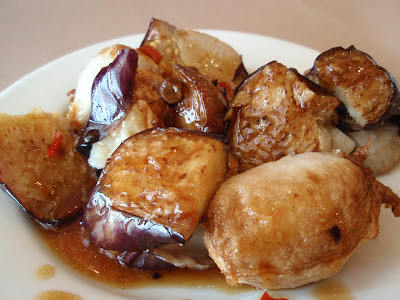 Mmm… this was another of LL’s favourites – Salad Prawns. By now you would know that LL loves anything that’s fried, with shrimps inside, eh! This dish of Salad Prawns did not disappoint – those crispy bundles of shrimps encased in dumpling skins were excellent! 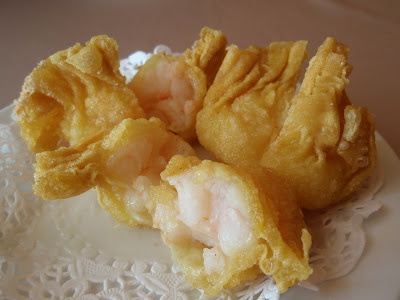 Their Yam Puffs were one of the best I have tasted. Delicious moist filling of minced pork wrapped inside a wonderfully light yam paste which puffed up beautifully when fried – the signature of good yam puffs. 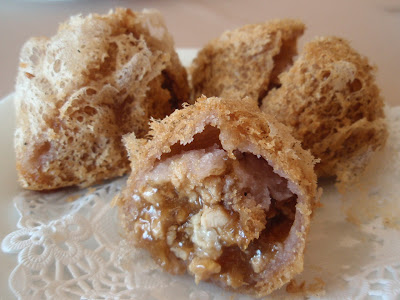 The Minced Pork Porridge was quite disappointing. Bland and tasteless, it only became palatable after adding soya sauce in it. You can skip this. 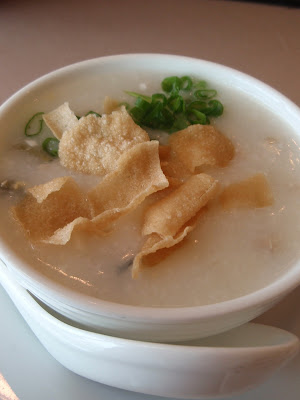 Ahhh… their Steamed Rice Rolls was good. We had the Cha Siew version. Smooth and tender, those delicious rolls just slip past your throat effortlessly, hehe! 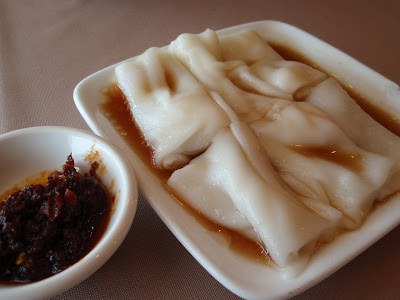 But their Cha Siew Pau was very disappointing. They looked very pretty and puffed-up sitting in the bamboo basket, but when you break one open, the filling was a starchy mess of indecipherable taste and texture. I think you can get better cha siew paus in some pasar malam, hehe! 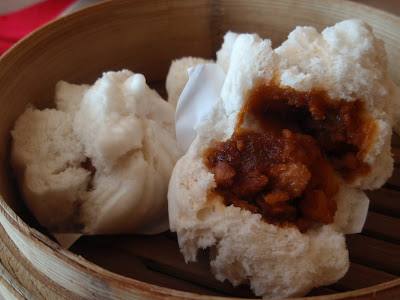 The Steamed Fuchook (beancurd skin) Rolls were also quite miserable. Nothing memorable about this item. 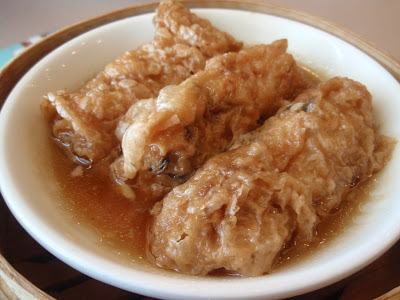 I like their Fishballs. Bouncy and springy, the taste and texture could almost match the great fishballs we get in Ipoh! Go for this. 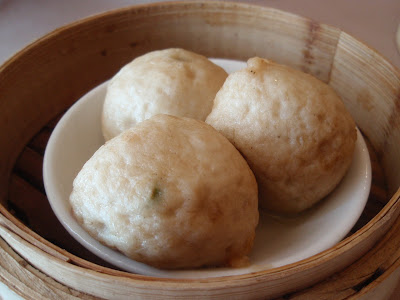 Hmmm… what’s a dim sum meal without the ubiquitous Siew Mai, right? Well, theirs were mediocre – I couldn’t really detect anything special to set them apart from any other siew mais. 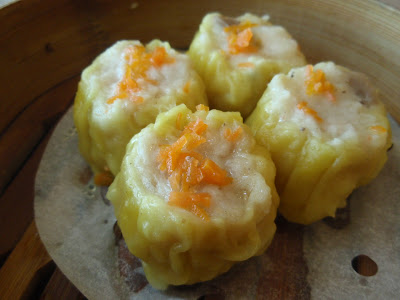 Ahh… we can’t possibly end a dim sum meal without having the Steamed Pork Ribs. Their version was just mediocre – while it was not unpalatable, it also did not stand out in any way. Have this only if you are like us – porky fans who just must have their pork ribs! 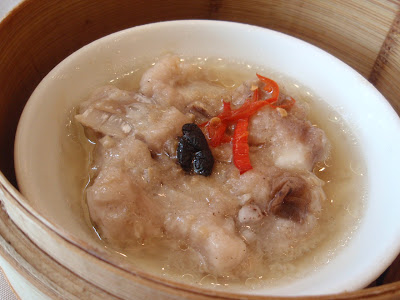 LL had to end his meal on a sweet note – so here’s his favourite chinese dessert – Tortoiseshell Jelly. According to him, it’s not as good as the one in Duck King. 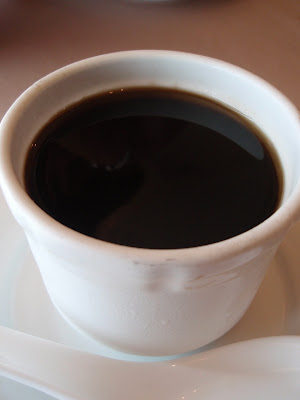 Their prices for Dim Sum range from RM4.80 to RM6.80 per plate. Chinese tea is charged at RNM2 per head. Apparently there’re some discounts/promotions on Dim Sum if you go on week days.