The name itself speaks volumes.  Noble Mansion – arguably one of the Oriental Group of Restaurants’ most stylish outlets.  Not only is the décor impressive, the whole ambience reminds one of a traditional mansion given an elegant modern twist.  This is also where Executive Chef Justin Hor unleashes his creative flair in the repertoire of Shunde-influenced dishes that Noble Mansion is famous for. Read my earlier review here.

I was hooked ever since the first time I dined here.  So when I recently was invited to preview some of Noble Mansion’s Chinese New Year’s offerings, I gladly made time for it.

To usher in the Year of the Goat, Noble Mansion has crafted a variety of menus to suit a wide range of budgets and the dining group size.  Set menus for tables of 10 people range from RM999++ to RM3,988++ and there are more than 10 menus in this price range alone.  There are also set menus to cater to smaller groups, say for 4 people and even for a minimum of 2 people.  Flipping through the set menus, I must say the choices are incredible.  I savoured some of the dishes to get an idea of what’s in store. Ever since Chef Justin Hor introduced white truffle into his yee sang, which I also tasted last year, I guess it has received the popular vote as it’s making its appearance again this year.  The white truffle powder certainly adds an earthy nuance to the yee sang, something which I’m not complaining about. The deep-fried white bait gives it that extra crunch. 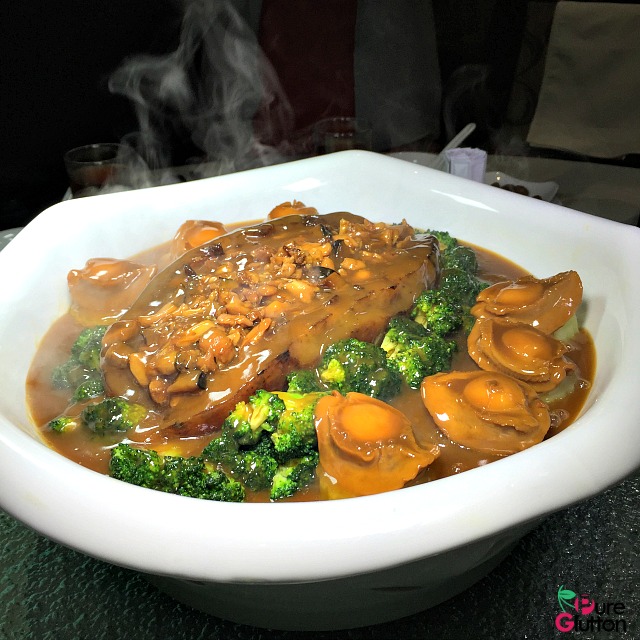 This has to be the mother of sea cucumbers – a huge wobbly braised one, stuffed with treasures like cubed dried seafood, gingko nuts and mushrooms.  It is flanked by whole abalones sitting atop pieces of winter melon studded with Japanese scallops in the centres.  Truly an impressive piece of work and it’s firmly on the top of my list of favourite dishes in Noble Mansion. The glistening dark golden skin is crispy to the bite while the tender juicy meat beneath it is tastily marinated.  I didn’t need the plum sauce as I wanted to taste the full spectrum of flavours of this amazing roast duck. The rice crispies are a clever touch as they are deliciously crunchy, having soaked up some of the juices from the duck. This is another utterly satisfying dish.  In fact, it’s like the ultimate seafood casserole.  The fish, the prawns are really fresh and coupled these with the own-made squid balls and stuffed clams, everyone at the table was totally in love with this dish.  The clams are kept firmly in place with a layer of minced fish and prawns paste latched onto them – just love the thought and care taken in this execution. Another divine seafood item.  Who can ever say No to lobsters?  Especially when it’s cooked in the simplest manner with just mushrooms and lightly enhanced with some shrimp roe. The first thing that struck me when I saw this dish is of course the pile of crunchy French beans crowing the rice.  It’s a clever touch as those beans are simply lovely when mixed into the rice together with the sausages and waxed pork. This dessert was a head-turner as all eyes were on them when they were brought to our table.  Lovely and refreshing with citrusy notes, the bird’s nest are a great end to a delightful meal.  More so, when it’s paired with crunchy deep-fried Nin Kou encased in thin rice paper. The above dishes are available in some of the Chinese New Year festive sets as well as on the a la carte menu.

This is hands-down the best Chinese New Year meal I’ve had so far this year.