The first thing I did was to taste the sambal that came with the bowl of Prawn Mee.  I could discern freshly-ground dried chillies (not the preservative-laden commercially produced type!), belacan and dried shrimps and laced with sweet fragrant pounded shallots.  Yes, that definitely passed my acid test. Next… the broth.  I scooped a whole spoonful and could see that it was thick and cloudy – that’s a good sign.  It tasted as it should be: brimming over with porky and prawny goodness, plus a host of spices chucked in by Vincent.  The rest: noodles, sliced lean pork, boiled egg and fresh succulent prawns all add on to that bowl of the best Prawn Mee I have tasted and certainly the best in this part of town.  It’s no surprise then that Vincent used to head the kitchen of Champs in Centrepoint for many years.  We all know that the signature dish of Champs is none other than Prawn Mee.  The broth was so good DL slurped up every last drop of it! Oh, you can ask for extra portions of chee yau cha if you like 🙂

The menu at Uncle Vincent’s is currently kept to a just a few signature items. I think that’s smart.  It’s always better to focus on a few very good items than to offer a wide variety of mediocre dishes. So, next came the Pork Noodles, served piping hot and I caught a whiff of its delicious porky aroma even as the bowl was placed on our table.  The broth was cloudy, having been boiled for hours with pork ribs and “toong choy” (a kind of pickled vegetable) and swimming in it were sliced lean pork, chunks of minced pork, intestines and liver.  The kwayteow was slippery smooth as it’s specially supplied from Ipoh (aha, that’s the secret!).  Of course, the aromatic lardy chee yau cha helped!  Chinese cabbage enhanced the sweetness of the soup… another winning item from Vincent. 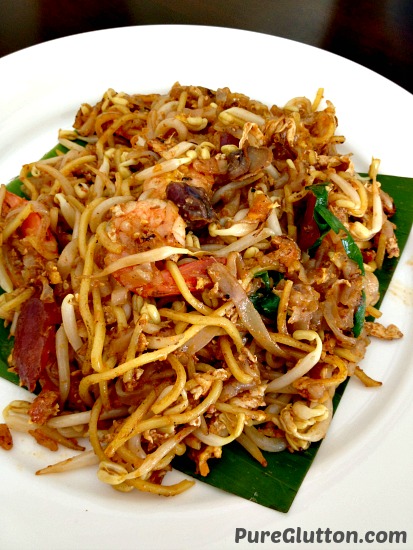 The Char Kway Teow & Mee did not disappoint.  In fact, it’s one of best we’ve had, surpassing even some that we’ve had in restaurants and hotels.  Full of wok hei, Vincent personally fries every single plate.  He doesn’t believe in frying several portions together.  Every single plate is fried on its own so you have to be patient if you order this at Uncle Vincent’s.  Vincent is very generous with the ingredients – I counted 6 medium-sized prawns in my plate, together with cockles, Chinese sausage and lots of fat short taugeh (from Ipoh).  Vincent uses the same smooth slippery kwayteow from Ipoh for his CKT.

Listed on the menu are Cantonese Fried Noodles, Fried Rice and Tau Yew Bak (Braised Pork in Soya Sauce) with Rice.  During weekends, Nasi Lemak is offered.  All dishes are priced at RM8 and drinks start from RM2 (Chinese tea @ RM0.60).

I can’t wait to go back and check out those other dishes and to have that Prawn Mee again!

Technically, this place is located in “Bukit Rimau” but to me, it’s still within the Kota Kemuning vicinity.