Once in a while, it’s good to go vegetarian – clean the system, so to speak. Yishensu is located next to Canton-i in the Old Wing of 1 Utama. It’s contemporary designed facade is certainly attractive – motifs of leaves cut out in light beech colored wood panelling. It’s interior repeats the same leafy motifs. 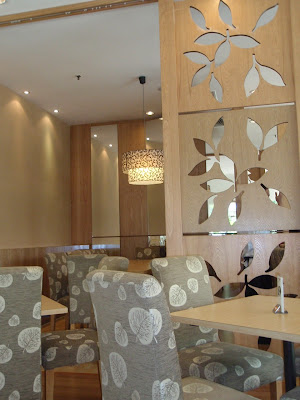 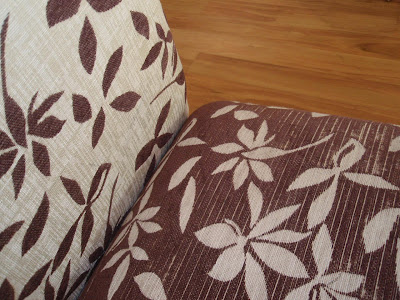 So… with such a nice modern environment, I expected the food and service to be top notch too. Well, the waiter was prompt in taking our orders. However, the food did not appear as promptly. They have all these lunch sets @ RM10.90 which gives you a soup, main course and a drink (lemon/green/chinese tea). Set lunches should be pretty quick, right? Or so we thought la…

The restaurant was not overly crowded… there were several occupied tables but the food took a long time coming. We ordered the set lunches and had to wait 20 minutes for the first set to appear.

This was the complimentary soup served with the set… old cucumber, red dates and some beancurd skin disguised as “meat”… The soup tasted very “cheng” and yummy. So far so good. 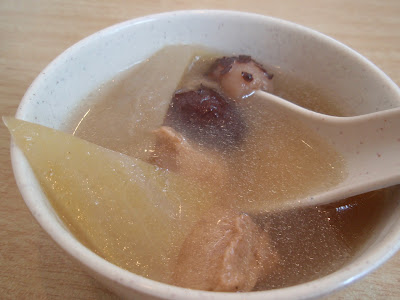 The 1st set of main dish that appeared was the Sweet Sour Pork Rice. Of course the “pork” was made of beancurd skin, cooked in a tomatoey gravy with chunks of cucumber, pineapple and capsicum. The sprig of coriander leaves looked rather pathetic – they must have forgotten to soak it in water. Taste-wise: just average. 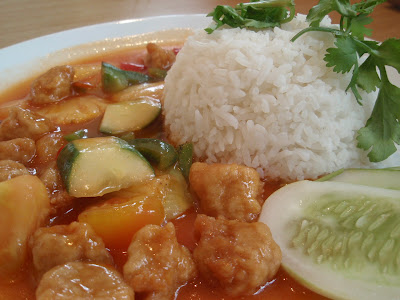 I ordered the Crispy Roast Goose (not in the set lunch) at RM9.00. This was the best dish for the day. The beancurd skin was flavourful and fried to a nice crisp. It was served with an excellent orange-based dip… tangy and refreshing. This was such a nice change from the normal chilli sauce that’s usually served to accompany this dish. Thumbs up for this! 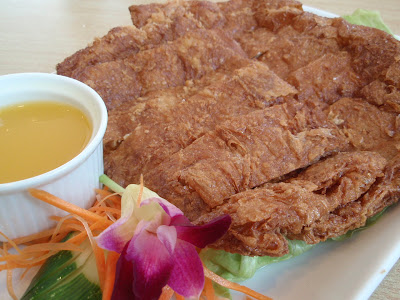 I had to wait almost 25min. for my Curry Noodles. When it finally came, well… the reddish curry looked quite appetizing but upon tasting it, it was rather disappointing. It was too dilute and was quite tasteless. I had to ask for some sambal to go with it… even so, I couldn’t finish the noodles. The only taste it had was “spiciness” – that’s all. 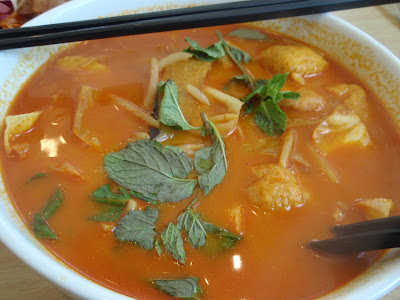 There were cabbage, aubergine, taugeh, beancurd puffs and some vegetarian mock “meats” like cha-siew and shrimps in it – all pretty tasteless. 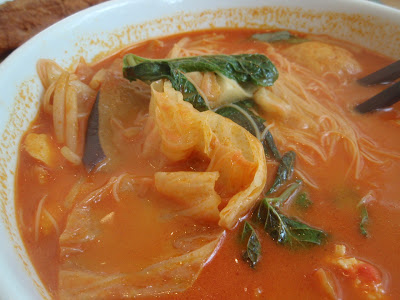 The last set of Singapore Meehoon finally appeared after 30min – my poor colleague was almost fainting from hunger by then! I tasted a bit of it and I must say it was much better than my Curry Noodles. It had taugeh, cabbage, lettuce, some bits of beancurd skins and chinese wolf berries in it. 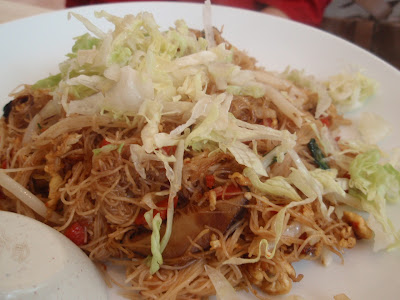 All in all, the set items were nothing to shout about – maybe the a’la carte dishes would fare better. Well, go try this only if you are not in a hurry… otherwise you may get very impatient with their slow service.