This is just a short post. Last evening we had a quick dinner at this place after a show at The Actors’ Studio. We have been here a few times in the past but I had yet to blog about it.

W.I.P. stands for “Work In Progress” and it’s owned by the same couple who owns “Soul’ed Out” in Hartamas – Fred & Michelle Choo. The decor of this cafe has undergone some changes since it first opened – sometime last year, I think… Back then, it was really in a state of “work in progress” – the walls, ceiling, floor were kinda “unfinished” and their crew wore overalls – just like workmen.

Now the place has somewhat spruced up… even the tables and chairs seem to have been replaced with bright shiny metallic ones… the walls and ceiling now look “done” and their crew now wear red t-shirts instead of overalls. The lighting remains kinda dim though.

Anyway, the reason why I said this is gonna be a short post is because we only had 2 dishes last evening. Generally, their menu is similar to “Soul’ed Out”… but the prices are a bit higher.

I had their Baked Chicken Roulade (RM26). When it was served, I was kinda shocked with its very small portion. The dish consisted of 3 small pieces chicken thigh rolled in ham, sitting atop baked potato slices with a few pieces of “siew pak choy” leaves. There were 3-4 cherry tomatoes circling the chicken & potatoes. Taste-wise, I would say it’s just average – this being a “main dish” the portion served was worse than an appetizer. 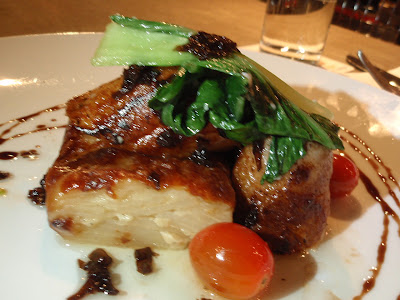 LL ordered the Seafood Aglio with Spaghetti (RM35). Just look at the portion and tell me if it’s worth the price? It’s just spaghetti served with prawns, a few small pieces scallops and topped with 2 small green-shell mussels. LL commented it tasted “nice” (I stole a bite and didn’t think it was anything spectacular) but …. even though there was pasta in the dish, it hardly lined a quarter of LL’s tummy! Maybe they think the few small pieces of scallops justified the price? 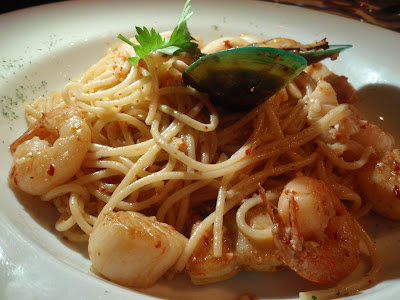 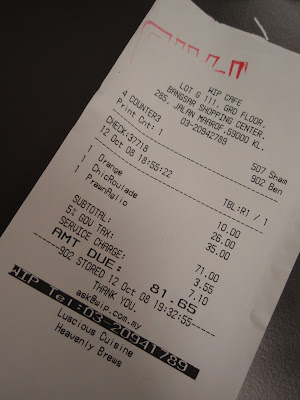 OK… I guess when you’re in Bangsar, you have to pay Bangsar prices… so go there only if you think you wanna be seen in a “hip” joint. Now, your interpretation of “hip” is as good as mine…

I think if I wanna eat the same kinda food, I’d head over to Soul’ed Out.