I have lived in this neighbourhood for more than a year and never knew about the existence of this cafe until a colleague mentioned it. Tucked away in the middle of a side road behind the never-used multi-storey carpark in Kota Kemuning town centre, I would never have thought of venturing there if someone had not alerted me to it. I was given some good feedback about this place and armed with those positive thoughts, LL & I decided to give it a try a few weekends ago.

It’s run by a Caucasian couple but on the night we were there, we only saw the “Mr” of that partnership and he was looking kinda flustered coming in and out of the kitchen. There was only one other occupied table besides us… so I thought we wouldn’t have to wait too long for our food. How presumptuous can one get?!! 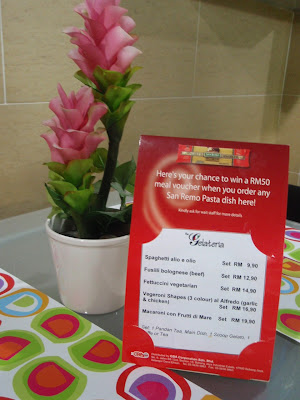 I liked their gay and cheerful placemats and the quirky pots of flowers on the table – every table had different types of rather unusual flowers. And their decor… uhmmm… how should I describe it? A mish-mash of eclectic tastes and stuff… 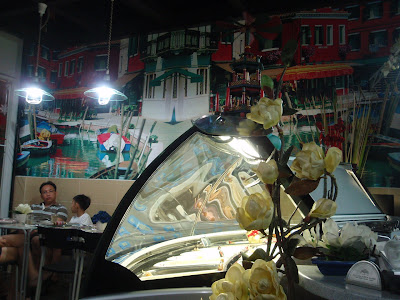 If you order their set meals, they come with a small glass of pandan drink, a scoop of gelato and coffee/tea. I was wondering what kinda “pandan drink” would be served … until I saw this… 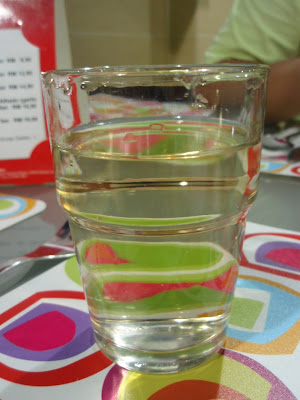 Now their glass is really small, OK – LL finished his pandan drink in 2 gulps. No free refills… each additional glass of the same artificially-flavoured pandan water costs RM1.50… so please be pre-warned. Ohh… the same glass of plain water will cost you RM0.50 – thank you!

Next, the waitress put this plate in front of us… 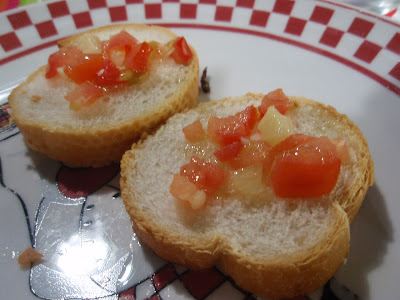 … 2 small pieces from a french loaf, topped with miserly portions of chopped tomatoes & garlic. Hmmm… ok, so far the meal has not turned out to be very positive yet… except for the tablemats and flowers…

I ordered their Roast Chicken set (RM17.90)… and this was served after about 20 minutes… 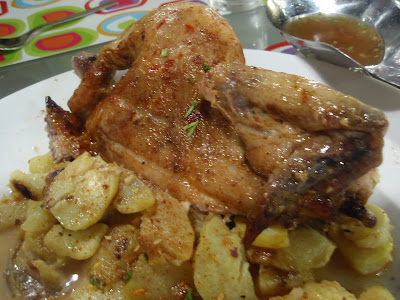 It was a Half Chicken… but do note that the chicken is something like a spring chicken and it came resting on some slices of cooked potatoes – so that was what “German potatoes” meant (as stated in their menu). The small pitcher of sauce served with it – well, it’s forgettable because I could not determine any flavour in that (although LL remarked that it tasted faintly of “bak kut teh”!!) Anyway, to give it some credit, the chicken was sufficiently marinated… meaning: it was not totally bland lah. And I suspect it’s one of those frozen chickens from the supermart because the meat disintegrated with just a flick of the knife and fork.

I had finished my roast chicken and there was still no sign of poor LL’s Lamb Steak. After reminding the waiter, his Lamb Steak (RM24.90) was served… 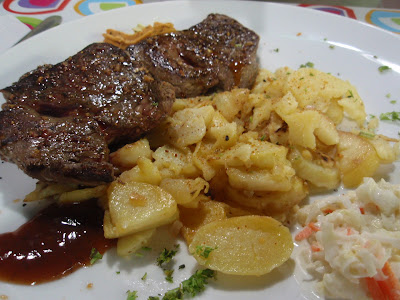 2 mini-sized pieces of lamb, the same German potatoes and a tablespoonful of coleslaw (goshh! how much would a little bit more coleslaw cost??). Worse still, when LL cut through the lamb, it was extremely rare inside! After waiting for more than 30 minutes, they served us uncooked lamb – sigh. So back into the kitchen the dish went… wait another 15 minutes plus another reminder, finally the same 2 pieces of lamb came back, this time it was more cooked but still with touches of pink in the meat. By this time our patience was really running thin and were in no mood for further confrontation.

We quickly asked for the scoop of gelato, downed our tea, paid the bill and left. 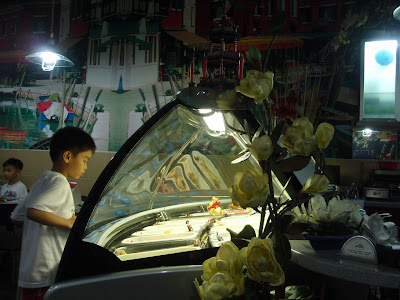 We should be smart like this boy here… just go there for the gelato lah…no need to eat and/or endure their other offerings! 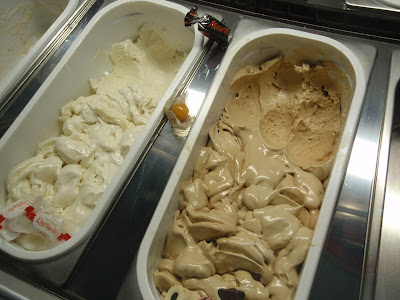 Their gelato is smooth, creamy and not too sweet – just about the only saving grace of the place, I think! 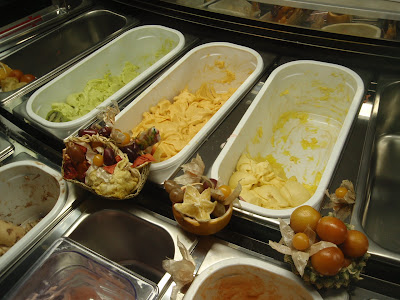