Thai Camp has recently revamped its whole menu structure to serve only one-dish hot meals and fast snacks, a la street-food style.  It used to serve a la carte dishes eaten with white rice.  Which probably is a great idea because there is a demand for such fast meals, priced very reasonably in a decent and comfortable premise.  Thai Camp’s offerings meet all those requirements and more – the food is generally delicious! Oh there’s a bonus too – pork is on the menu.  How authentic is that?  Yes, pork is a generally-must-have component for Thai cuisine, in my opinion.  The dishes served in Thai Camp are typically those you would find on the streets of Thailand, whether it’s in Bangkok, Phuket or Chiangmai.  The repertoire, although not very extensive, does cover a good range of popular dishes found all across Thailand. I was happy to see that “Kao Soi” is in the menu.  This Chiangmai staple dish is quite rare here – not many Thai restaurants in KL/PJ serve this.  To the uninitiated, it’s labelled as “Thai Camp Curry Noodles” with “Kao Soi Kai” printed in smaller fonts below it.  I must say Thai Camp’s rendition reflected the authentic flavours of this dish based on the kao soi I ate in Chiangmai.  Well, that shouldn’t be a big surprise as Thai Camp is run by Nic and his Thai wife rules the kitchen.  At only RM7.50 a bowl, I think it’s a steal – it’s a huge bowl of noodles done 2 ways: soft and crunchy submerged in a thick flavourful spicy broth and a big chicken drumstick. My personal favourite was the feisty Seafood Tomyum Noodles (RM7.90).  This was the northern Thai tomyum which has coconut milk in it.  The broth was extremely robust which will leave some happy tingling on your tongue.  Two big succulent prawns, fresh squids and tomatoes jostled for space in the bowl of Thai rice noodles.  You can choose to have your tomyum with rice too but that will cost you RM10.90 as I believe there would be more seafood added for that serving. The Pork Panaeng with Rice (RM7.90) did not disappoint either.  The thick creamy curry sauce with lean pork was an excellent accompaniment to the plain rice.  Nothing fancy, just plain rice and aromatic curry – one of life’s the best comfort food! What didn’t quite cut it was the Pork Leg Rice (RM8.50).  This was disappointing for me as I found that it’s lacking in flavours.  The pork was tender enough with soft gelatinous skin and all but somehow, there’s no punch in the taste.  I highlighted this to Nic and hopefully there’s an improvement in it soon. The thick pork cuts of their Moo Ping won hands-down as the top favourite of the meal.  The marination was flavoursome and the meat nicely grilled with some charred sides.  This is certainly a must-order for us in our future visits. 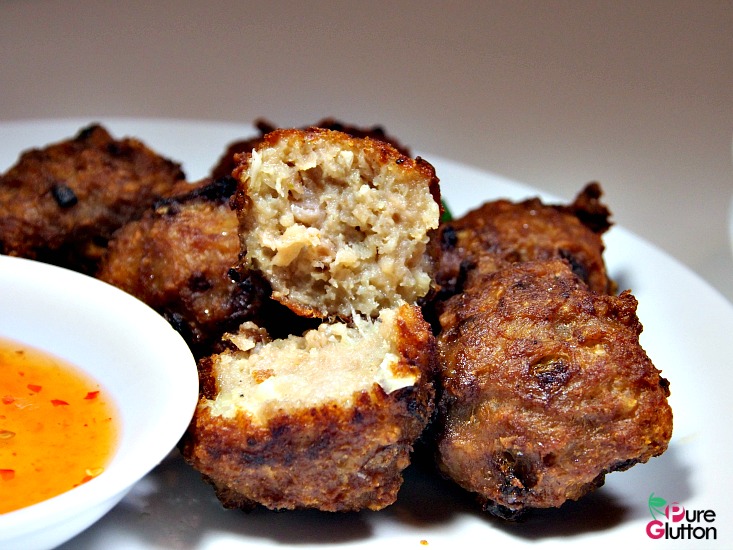 The rest of the deep-fried items were decent if you want some crunchy bites to go with the main hot meals.  The chilli dip served with the fried items can be better, though.  I found there’s no kick in it – the heat and zest needed further enhancement. Desserts were basic and simple.  Currently, there are only two choices: Thai Sago Pudding and Coconut Jelly set in little plastic tubs, priced at RM3.50 each.  I definitely preferred the coconut jelly as I found the sago pudding a bit pasty and too sweet. So, Thai Camp may be a bit cramped in terms of space but it’s a good spot for some quick bites of authentic street-style Thai food.  And if you are ever craving for a bowl of kao soi, you know where to go!