On our 2nd last day in , we decided to pay a visit to my office which had just been relocated to a spanking new building on . After a quick tour round the brand new office and some simple breakfast there, we proceeded to do some shopping at the Pearl Market in Hongchiao. It’s a cosy little mall which sells lots of local products, not only pearls.

By lunch time we were quite famished and we eagerly went off to lunch with several of my colleagues at the Merrylin Restaurant located near to the office, ie . It seems Merrylin is a popular chain of restaurants in and they have quite a number of outlets there.

I apologise for some of the photos which are a bit blurry – the restaurant’s lightings were not very bright and we were seated in a dark corner. By the time we reached the restaurant with my colleague, Sundae, my other colleagues had already ordered the dishes – authentic Shanghainese fare which they wanted us to try!

Slices of Bittergourd and Cucumber prettily arranged with flowers! The gourd and cucumber had been slightly pickled in a mild brine to remove the tartness so they tasted fresh and crunchy without the greeny bitter tastes. Both these vegetables are good to cool your body down. 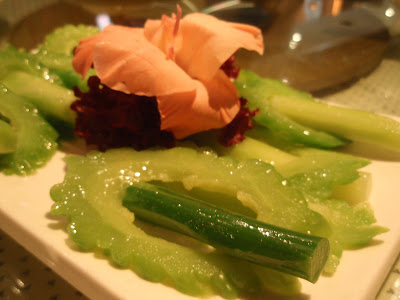 Oh my… these raw Tiger Prawns (almost-sashimi style) were absolutely delicious! They had been soaked in Chinese wine and sweet plum juice. When you bite into these delightful morsels, the fresh prawns were bursting with the wine and plum flavours – divine! 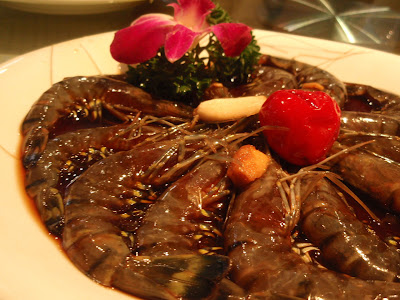 These Crispily-fried Fish (don’t ask me the name!) were DL’s favourite! They disintegrated immediately in your mouth – bones and all! 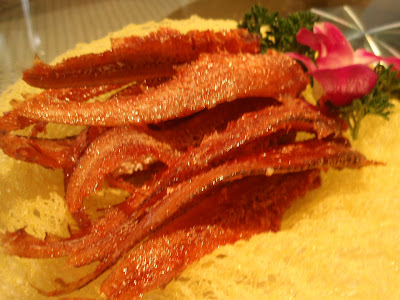 Presentation-wise, these scored lots of points! They were just Boiled Shrimps clinging onto pieces of cucumber, topped with mayo and crowned with bright orange fish roe… very similar to the Shrimp Salad we have here. 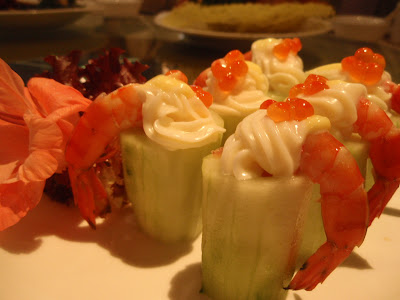 Next were the Hot Dishes…

Ahhh… what have we here?! This was something my colleagues insisted we must try! In case you can’t make out what the somewhat-blurry pic depicted, these were Duck Jaws! Yes, the lower half of the duck’s head! The beaks were wrapped in aluminium foil for the eater’s easy handling. The duck jaws were very well marinated and deep-fried – you can actually eat up the whole piece – bones, cartilage, beak and all! The more you chew, the more you could taste the fragrance of the sweetish spicy marinade of spices that had gone into the jaws. 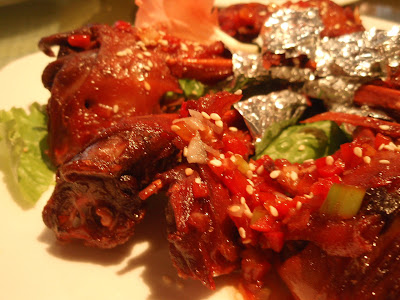 These lightly-saute’ed Asparagus were drenched in a creamy rich topping of crab meat and roe – so sinfully decadent, I tell you! But it was oh-so-yummy! 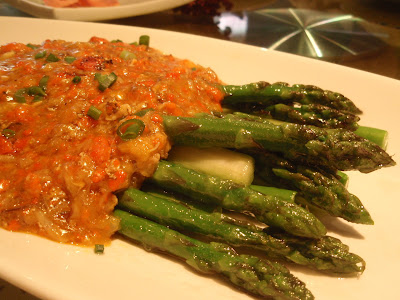 This next dish of orangey-brown chunks was actually Braised Pork with Beancurd. Many Shanghainese dishes are in this colour as they have been cooked in their unique blend of soy sauce, sugar and vinegar – no colouring added. The tender meat had totally absorbed all the flavours – indeed, this was a robust dish that would have seen many bowls of rice downed! 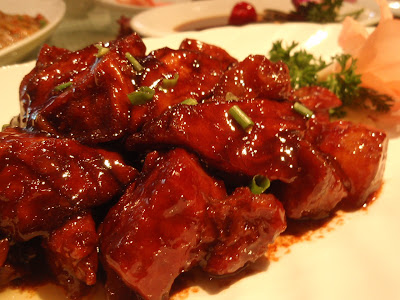 This was supposed to be another “vege” dish but as you can see, the thin slices of pork belly quite overwhelmed the leek & capsicum and thus rendered this a rather porky item! We were already quite satiated by the Braised Pork by this time so we picked out all the vegetables from here and left the meat alone, hehe 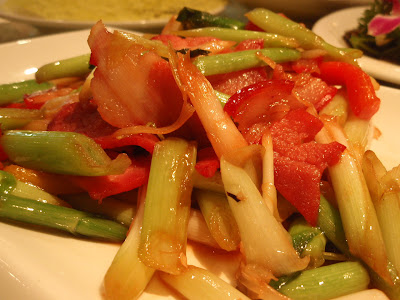 Now, in case you think these glistening plump chunks were meat, you are wrong! They’re actually fish! Some kinda fatty eel-like fish – very tender and succulent, again cooked in the typical Shanghainese style. 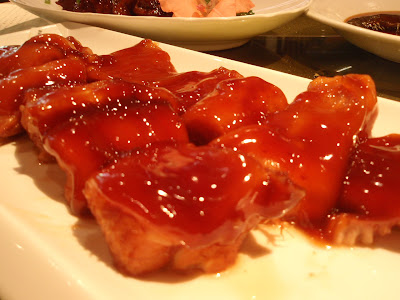 After all the above dishes, I was already totally stuffed and had no more tummy space for even a sesame seed! However, my hosts insisted on ordering 2 types of Shanghainese desserts for us and these arrived at our tables…

These 2 were like some kinda fluffy marshmallow with creamy custard inside. The other plate had these huge fried spheres – like the Indian puri but these were sweet. They were kinda like fried balloons – all air inside the crispy skin! 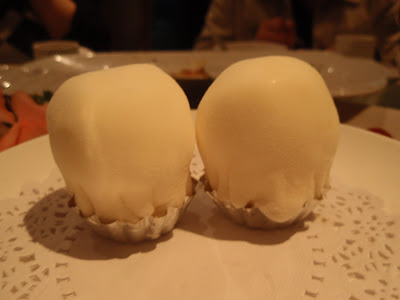 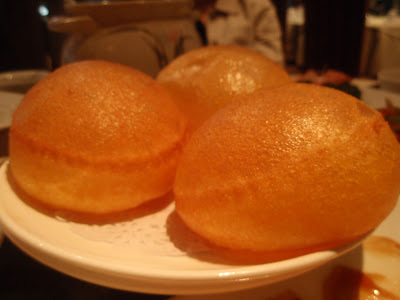 After that satisfying lunch, accompanied by my very experienced and eloquent “tour guide” colleague, Bill, we went to the city centre for some last-minute shopping and sightseeing. Dinner on our last night in was in a restaurant in the Super Brands Mall near The Bund.

Bill suggested trying more cuisine and so we found ourselves in a very busy and popular restaurant in the mall. Although the restaurant was almost full, service was very courteous and super fast!

First to arrive were the Cold Dishes…

This beautiful pagoda-like creation was actually slices of Pickled Radish piled and arranged so nicely and precariously on a plate. The radish slices were sweet and tangy retaining much of its original flavour – really “opened up” your appetite! 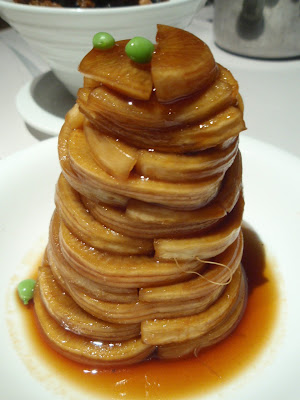 These delightful cubes of Pumpkin were sweet and refreshing… a great contrast to the rich and savoury dishes to follow! 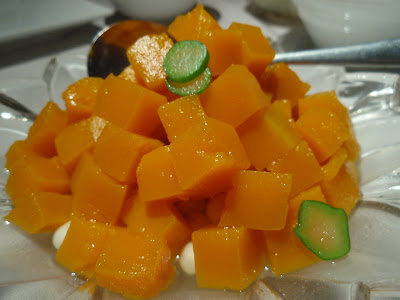 According to Bill, this next cold dish is very popular and its name loosely translated from Mandarin meant something like “wife cooking loving dish for husband”! (yeah, you go figure!) It was a combination of beancurd cubes, black fungus, peanuts and mushrooms cooked in a sweet tangy spicy sauce. 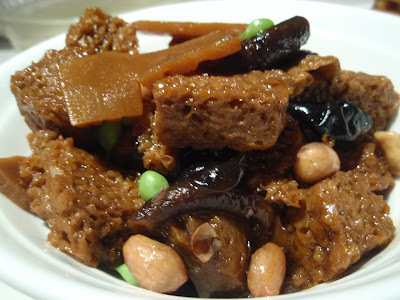 Simple Stir-fry Celery with Beancurd Strips as our vege dish. 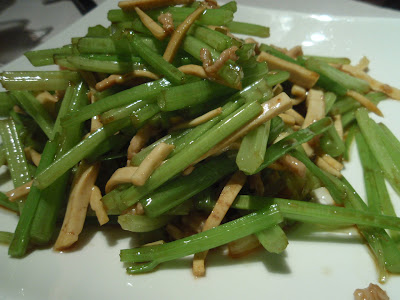 As it was a chilly night, Bill ordered this Fish Broth. Slices of thick fresh white fish cooked in a sourish spicy soup with pickled veg (“kiam chye”) and tomatoes – yummy and so comforting to warm up our tummies! 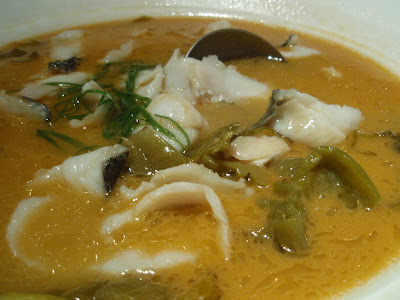 See how fresh the fish were?? 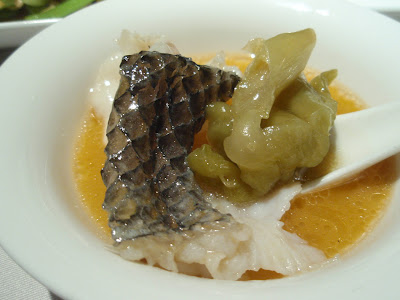 We each had a piece of this quaint Glutinuous Rice Siew-mai. Soft fluffy chewy rice encasing some meat inside – nice! 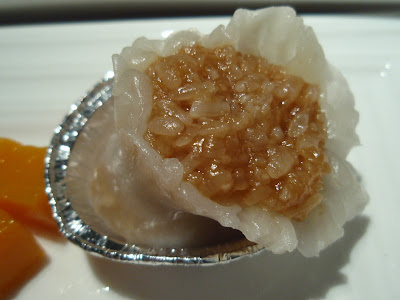 Last but not least… the must-have Tung Po Pork! According to Bill, the pork had been so skillfully cooked that the fatty part would “look like fatty, taste like fatty but will not feel like fatty!” True enough… when you bite into these meltingly tender pork, you don’t get that “jelak” fatty-pork feeling at all! They were served in individual cute little claypots big enough to hold just exactly 2 pieces of bite-size pork! 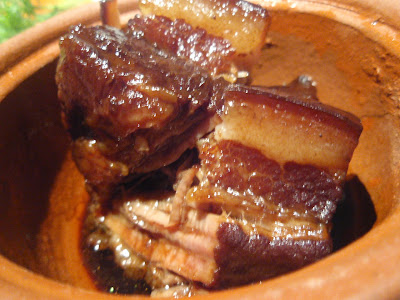 After dinner, we took a short walk to The Bund, which was just behind the mall. It was lovely to just hang out there in the chilly night and watch the boats with colourful lights speeding across the river… 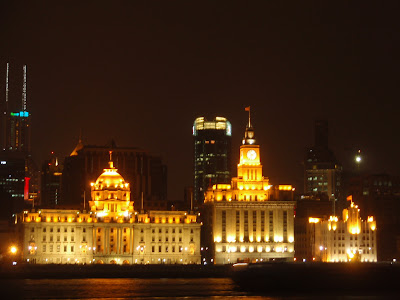 We were told that Shanghai by day looks like a black & white TV but at night, it is a Colour TV! 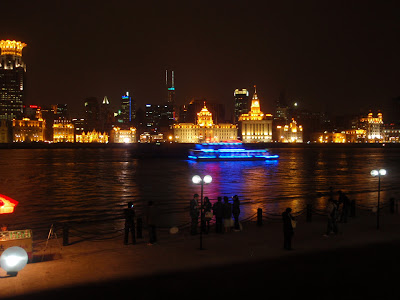 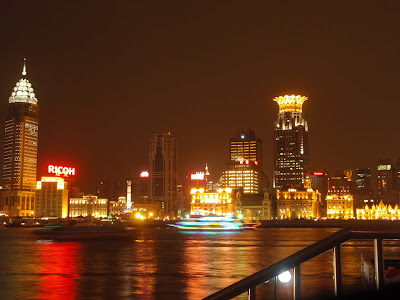 The 2 spheres of the Pearl Tower can change colours one, you know… 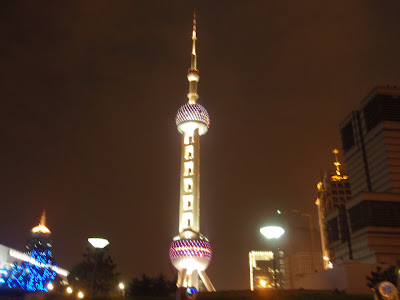 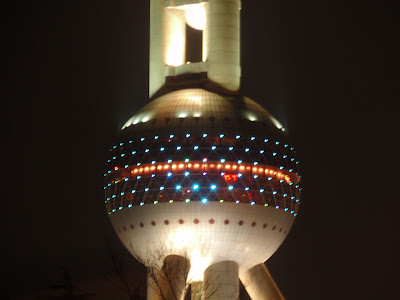 So… that was the final night in Shanghai for this trip.