My friends have been asking me when I’m resuming my Shanghai posts as the last one was 2 weeks ago. OK, here’s continuing the food fest … on to Day 4!

The highlight of that day was our trip to Zhouzhuang, a popular water village in the outskirts of Shanghai. We joined a local tour for the afternoon trip there. More about this later.

Since we had the morning free before going to Zhouzhuang, my friend CH suggested we go to Carrefour as I wanted to buy some Shanghainese snacks. Now it seems there are 14 Carrefour’s in Shanghai and I can’t remember which was the one we went to – CH actually dropped us there on her way to the airport that morning. Anyway, there was this interesting “monument” at the entrance, so perhaps some of you would know which particular Carrefour we went to! 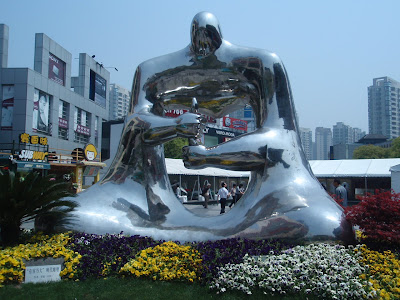 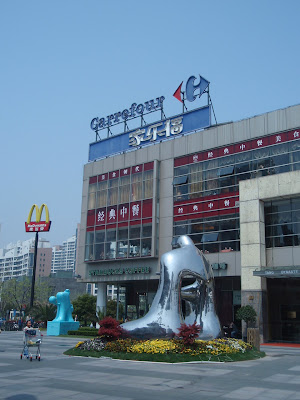 There is a Gourmet Square there with many familiar outlets like McD, Starbucks, Subway… 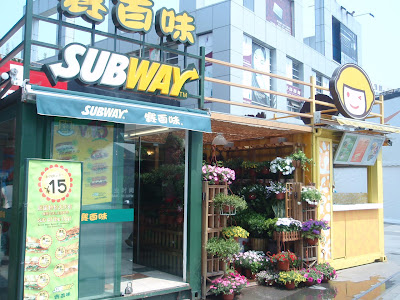 Paris Baguette is a popular cafe in Shanghai… something like Delifrance, I guess… 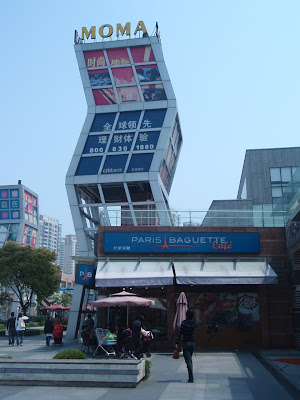 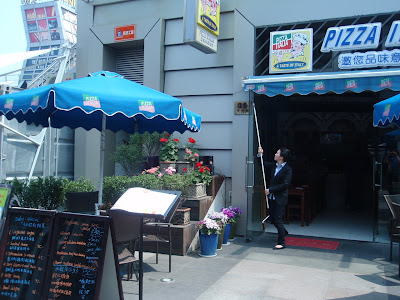 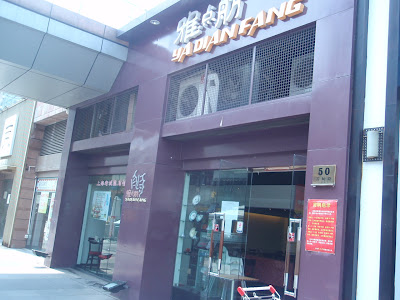 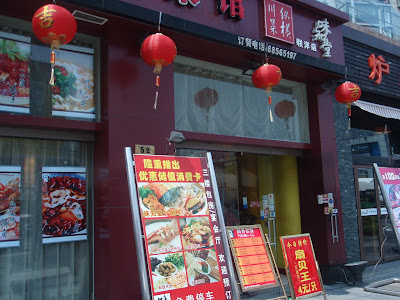 Since being in Shanghai, I had yet to try a Noodles dish so I was happy to see Fried Noodles on the menu. It was vegetarian-style – egg noodles tossed in strips of bombay onions, red & green capsicum and bean sprouts – simple but pretty yummy! The only thing missing was chilli padi… 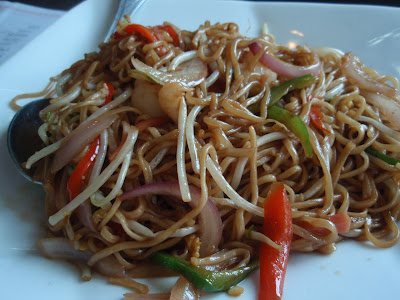 We tried their XLB too but sadly they were quite disappointing – a far cry from the ones we had in Nanxiang! There wasn’t much soup in the dumplings. 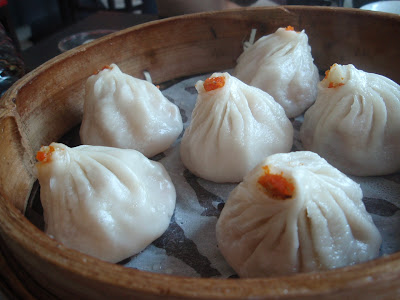 Seeing “wantan” on the menu, I decided to give that a try. What came was a huge bowl of giant dumplings, quite unlike our local wantans! The dough skin wrapping the minced meat was very thick and after eating the first two, I decided to eat only the meat filling. I would be too bloated if I had eaten the wantan skins too! 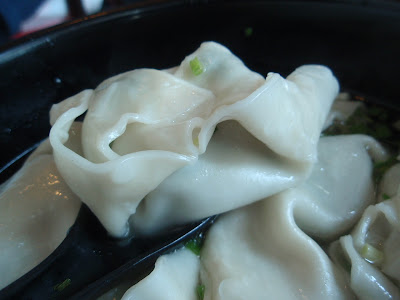 We ordered another type of “dumplings” and what came was this… 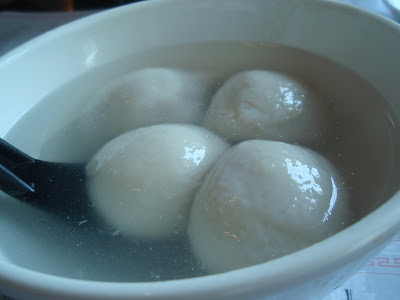 At first I thought those were the sweet rice dumplings (“thong yuen”) we usually have here but the filling was savoury minced pork, wrapped with glutinuous flour dough. Don’t be misled by the “soup” – it’s just tasteless boiled water, not soup!

After breakfast, we took a cab to the Pudong Shangri-La Hotel where the tour operator picked us up for the trip to Zhouzhuang. Zhouzhuang is located between Shanghai and Suzhou, a 1.5hour ride away. The journey there was dotted by plain farmland & some industrials sites on both sides of the road. 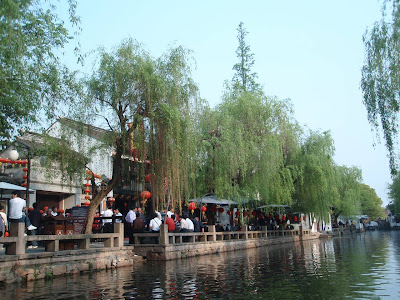 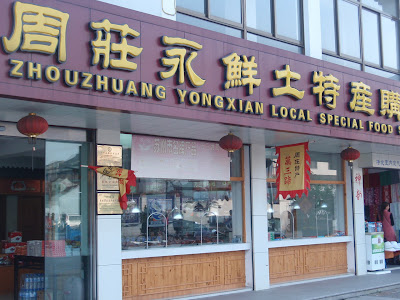 but it is a pretty town with its intertwined canals and waterways offering a timeless beauty and charm to the whole place. The winding water lanes are capped with ancient stone bridges and the most famous one is this Twin Bridges – considered as the symbol of Zhouzhuang. 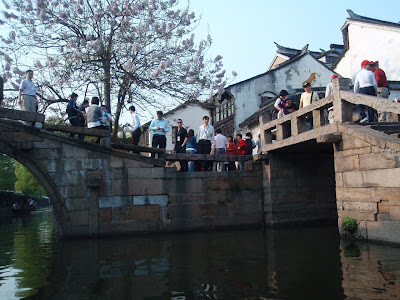 Graceful willow trees frame the canals adding charm and shade to the visitors… the ancient Chinese architecture of the houses and buildings there have been well preserved. Many of these houses date back to the Ming and Qing dynasties! 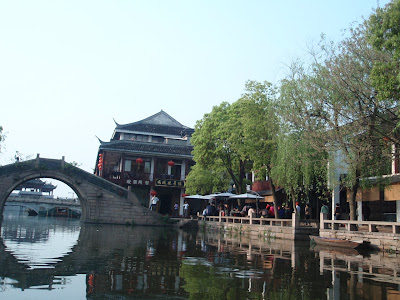 We also took a ride on the chinese gondolas… and all of them were manned by women! 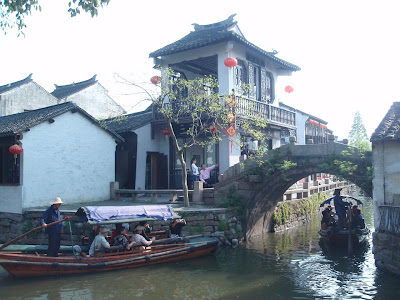 Guess what is the speciality dish of Zhouzhuang?? Everywhere we went, there were shops displaying these… 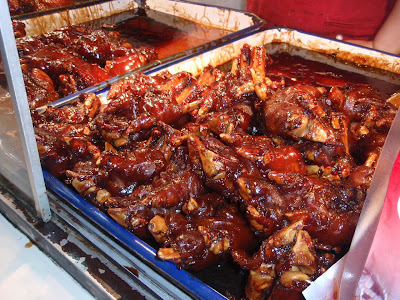 Ahh… perhaps this is a clearer picture? 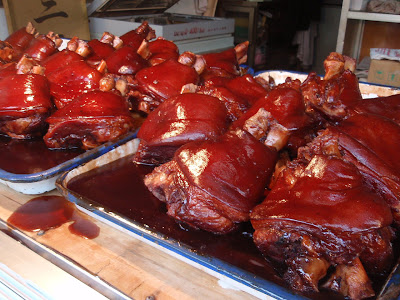 Yesss – it’s Braised Pork Knuckles! These are the speciality there – huge round knuckles braised in sugar, vinegar and spices. We bought a few of these, vacuum-packed to take back to Malaysia. They have been well braised with all the flavours of the sauces & spices permeating every fibre of the meat – yummy!

This was the Exit from the water village… 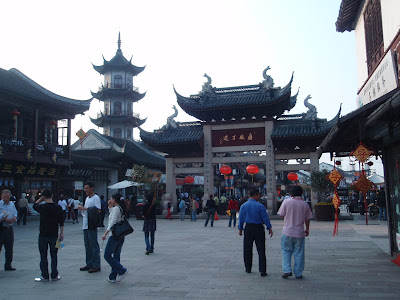 Traffic was pretty congested that evening going back to the city. It took more than 1.5 hours as vehicles were just inching their way in, particularly at the toll booths entering the city.

By the time we reached the condo, it was about 8pm and based on CH’s suggestion, we decided to have dinner at Shanghai Spring, a restaurant located within the condo gardens. Believe me, we had a pretty hard time locating the restaurant through the maze of the japanese garden and we actually had to walk through dimly-lit eerie corridors of the huge chinese building which houses the restaurant! 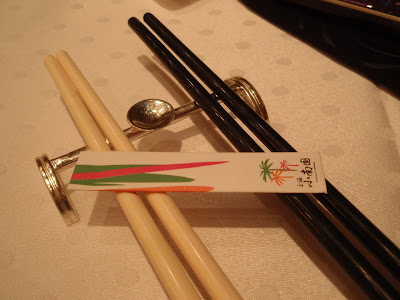 Finally we found the restaurant and it was way past the regular dinner time (Shanghainese usually have their dinners around 6-7pm) so it was no problem getting a table. I had this rose tea… which was really fragrant and calming…(after that eerie walk search in the cold!) 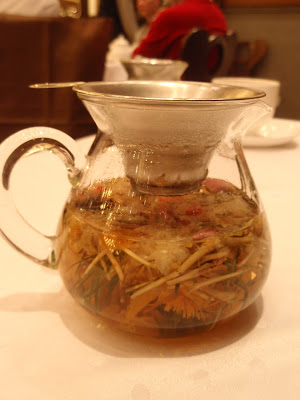 Since there was only two of us, we couldn’t order that many dishes. We started with some Cold Dishes… this was Jellyfish with Brocolli Stem Strips – very crunchy and refreshing! Just look at the pretty presentation! 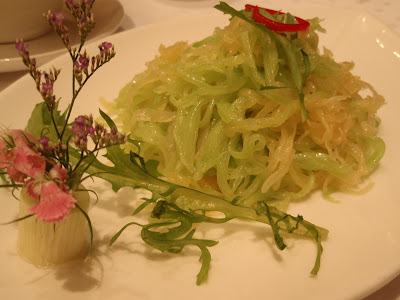 Next was the Cold Chicken in Wine – it was a huge portion and we had to tapau the balance home! The cold chicken was very flavourful, having ingested the fragrance and flavour of the chinese wine… 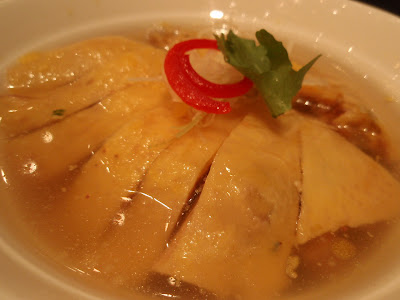 Guess what this is?? It’s so pretty that when it was placed on the table, I almost couldn’t bear to dig into it. It’s thinly-sliced Tofu topped with minced pickled vegetables and doused with a yummy soya-based sauce. The tofu slices were just a few mm thick – that’s the handiwork of skilled chefs and arranged so artfully on the plate! 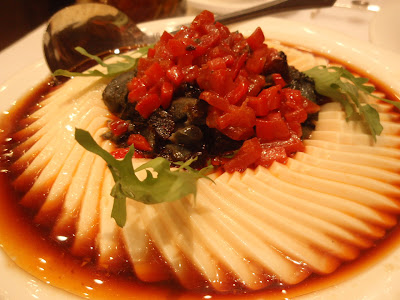 This was 1 of the hot dish we had… Beancurd Ribbons with Fungus on a bed of siew pak choy. The tofu ribbons were a bit bland but the fungus and vege were delicious! 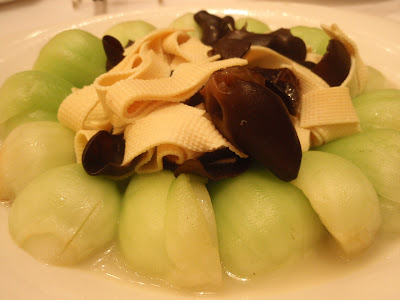 CH recommended that we should try their Braised Pork Knuckle as she said it’s one of the best. OK, after the teaser in Zhouzhuang earlier, we took her advice. 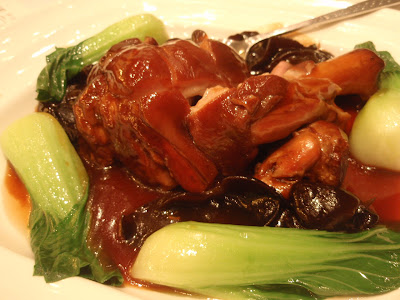 Well…what’s the verdict? I would say I have tasted much much better pork knuckles elsewhere (even the vacuum-packed ones from Zhouzhuang were more tasty!). We managed to finish the vegetables and fungus but couldn’t quite finish all the meat. 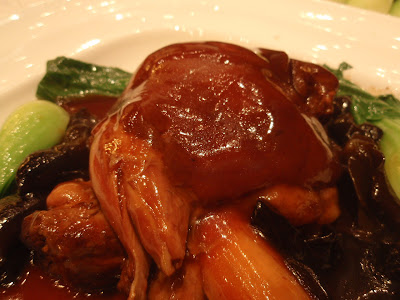 After the filling dinner, it was good to take a walk back to the condo. The night air was cool – very pleasant! 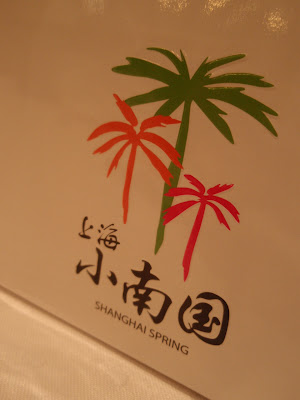