Jaya Noodle House
Ground Floor
Jaya Supermarket
Section 14
Petaling Jaya
The Jaya Noodle House in Jaya Supermarket will soon be moving to a new location come January 2008. What a shame! This popular noodle shop has been there for years – it’s almost an institution in that building and a well-loved makan-place for folks around Section 14, Petaling Jaya. The present Jaya S’market building will be demolished soon to make way for a brand new mall and most of the tenants there have already moved out.
I went there for lunch last week and there was the usual crowd of shoppers and nearby-office-workers there. I ordered one of my favourites – Wantan Noodles with Roast Pork & Roast Duck. The serving came with more roast meat than noodles! 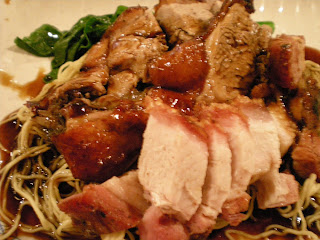 The noodles were cooked just right with just the right springiness. The roast pork with its crunchy skin was yummy and the roast duck was tasty, although its skin was no longer crispy.

According to the cashier, they will be relocating to Jaya One at end January 2008. I shall miss this noodle house which is just a few minutes’ drive away from my office.

Another restaurant which is just a stone throw’s away from my office is the iThai Restaurant. The “i” in the name stands for “Italian” as this place serves a mixture of Thai and Italian fare. However, every time I go there, I always have their Thai noodles.

Their Tomyam Meehoon is served in a claypot. It’s a pot of spicy tangy tomyam soup flavoured with lemongrass, daun limau purut, chilipadi, lengkuas with very fresh prawns, squids and fish slices. It has the right combination of spiciness, sourness and hotness! This is one noodle dish which I do not hesitate to recommend. 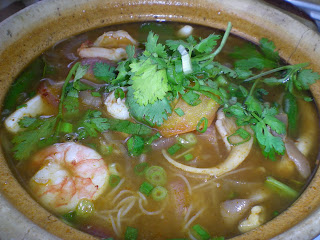 The other day I tried their Thai Latna, upon the waiter’s recommendation. It’s actually Kwayteow Cantonese-style but given a Thai twist. They used kailan for veg and there’s a hint of fishsauce in the dark gooey gravy poured over the kwayteow. It’s a huge serving and I could only finish half of it. The gravy was a bit too starchy which, after a while, made the noodles kinda “expand” and filled up your stomach very quickly. 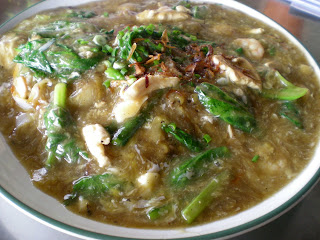 Their noodle dishes all cost RM6 which is great value-for-money and that’s one of the reasons why the place is usually full during lunchtime.

The other day we arrived at Mega Mall very early and was looking for a place to grab a quick breakfast. Coming up from the carpark, we spotted C-Jade Express and decided to pop in there. At that hour (which was just after 10am) they had limited dishes available. Noodles were highly recommended, so we ordered the La Mien with Beijing Wantan and La Mien with Shanghai Dumplings. On the way in, we also saw a dish of yummy-looking fried chicken wings, so we ordered 1 of those as well.

The chicken wing was humongous! It was skewered before frying so that the wing was presented in its entire wingspan, which easily measured at least 10″. It was hot from the fryer – the skin was super-crispy and it was well-marinated, with a hint of ginger and chinese wine. If not for the noodles ordered, we would have wolved down another one! It was so good we vowed never to miss this the next time. 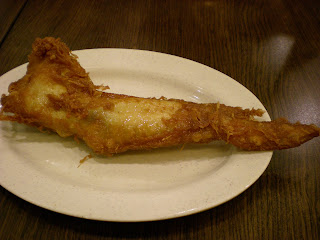 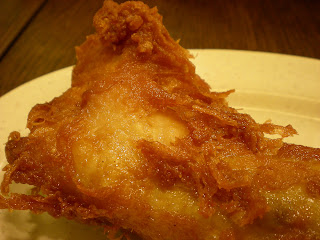 This is how the yummy Wing looks like, close-up!

Both the bowls of La Mien tasted exactly the same, except for the Beijing Wantan and Shanghai Dumplings. The meat fillings were different – the wantan had bits if parsley and the skin was thinner. The dumpling was shaped in a half-moon and its skin thicker. I would say the La Mien were pretty ordinary but at that early hour, with growling tummies, we didn’t complain. 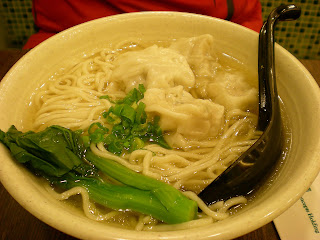 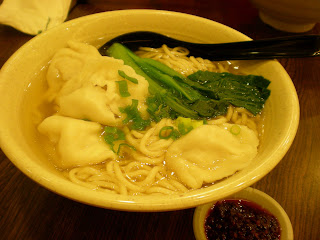 See any difference between the 2 bowls of La Mien?