New Wing of 1Utama
(A few steps from Cold Storage)

There used to be a Giant Supermarket at the New Wing of 1 Utama. That has now changed to Cold Storage and with this change, several new food outlets have sprouted in that vicinity. One of them is this Chao Yen serving Teochew cuisine. 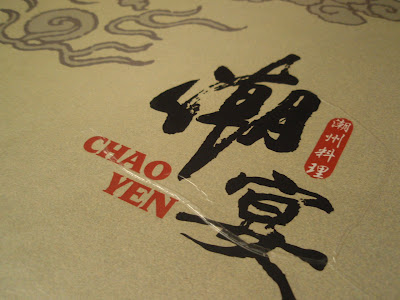 Since it opened a few weeks ago, they have been offering their Lunch Sets which consist of 1 Main Item (rice/porridge/noodles) and a complimentary Braised Duck item and 1 “home-boiled” drink – either sugarcane + water chestnuts or loh hon kuo + longan. The Lunch Sets are priced differently depending on which Main Item you choose. 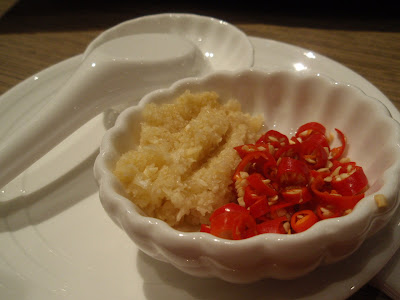 As it was the lunch hour, we decided to order the lunch sets, thinking that this would save time… because surely these would be express items from their kitchen, no? Well, I would say the service was painfully slow, even though the restaurant was not exactly bustling with crowds of customers.

The first to arrive was this Braised Chicken Wings with Fish Sauce (RM13.90) served with a bowl of white rice and the complimentary drink and braised duck. Looking at the pale chicken wings on the plate, I had an inkling that it would be quite bland. Well, it proved to be correct – when I tasted the colorless soup-like “gravy”, it was pretty tasteless save for a hint of chinese wine and the chicken flavour. 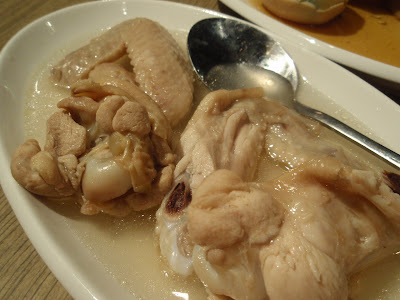 This was the complimentary loh hon kuo drink I had… 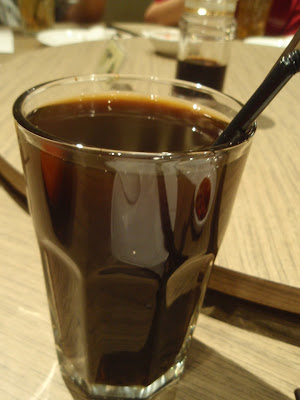 … and this was the complimentary Braised Duck with Half an Egg. They serve you the duck wings for this – you either get the “mini-drumstick” part or the other “middle-part” of the wing. I would say this tasted a tad better than the chicken wings – for one, this had more colour to it and it was flavoured with star anise – that much I could detect from the sauce. But be prepared to eat it with your fingers as it proved to be rather chewy and you need to pull the meat off rather vigorously! 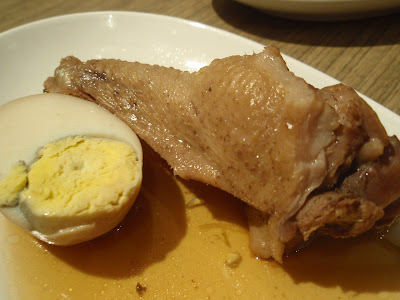 My colleague ordered this for his main item – Braised Pork Belly with Preserved Mustard Vegetables (mui choy) (RM16.90) served with a small bowl of white rice. As you can see, this was another pale bland-looking dish and taste-wise, it really wasn’t very exciting. I’m sure many of us can cook this much better at home! The bowl of white rice was barely enough for my colleague, so he ordered a 2nd bowl and that cost RM2.00! (mind you, it was a really small bowl too, ok!) 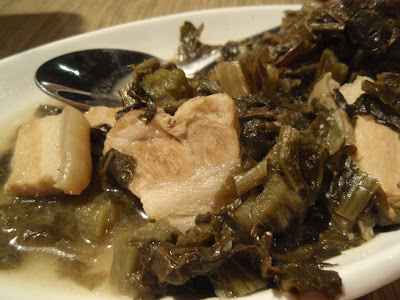 For me, I ordered their Teochew Noodle Thread (meen seen) with Pork Gut & White Pepper Soup (RM19.90). Looks-wise: very boring! Taste-wise? Nothing spectacular – just like any pig stomach soup you can boil at home… it was peppery enough, there were a few pieces of “ham-choy” (pickled mustard leaves) and about 8 pieces of pig stomach. 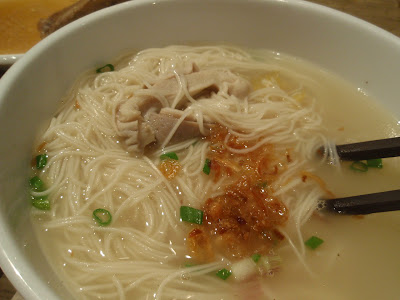 All in all, it seems Teochew cuisine served here are on the “ching” side, ie simple, bland, pale. Obviously they don’t use dark soya sauce here much! They have a comprehensive range of a’la carte items on the menu – quite a lot of porky stuff (including spareparts!)… so maybe those are worth trying, maybe in the next visit.

As for the lunch sets… hmmm… I wouldn’t say they’re worth a repeat visit.

Ahhh... been craving for this! At last - satisfact

Guess what’s coming up for lunch? Been craving f

Cooked a huge portion of Curry Fish Head today and

Chicken cooked in the most appetising way - with l