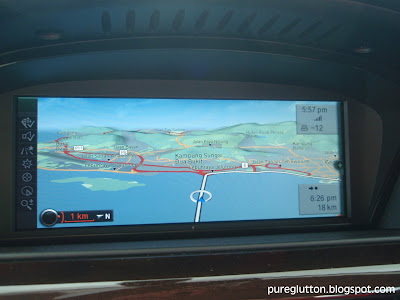 Recently we took a short break for a makan trip to Penang. It’s been several years since we last drove there. So, when we were finally crossing the Penang Bridge, I couldn’t help clicking the above pic from the screen of my car’s GPS.

It was drizzling as we left the mainland heading towards the island. As we were crossing the bridge, the sun was finally peeping through the dark clouds … but it was still kinda hazy, as you can see… 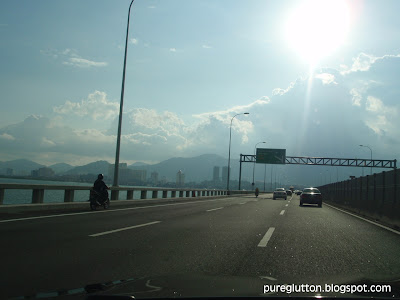 By the time we reached Gurney Drive, it was dinner time. We didn’t realise Friday evening traffic in Penang can be that bad, kinda underestimated it! So, on DL’s friend’s invitation, we headed to Bali Hai at Gurney Drive. The other Bali Hai which I know well happens to be a Dive Centre in Tioman, haha! Anyway, this Bali Hai in Gurney Drive is a very popular seafood place, judging by the crowd there! 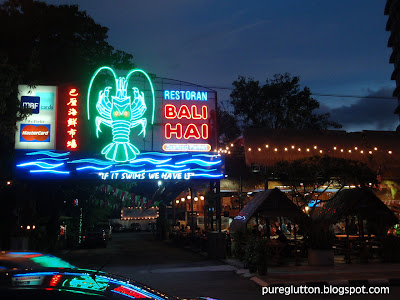 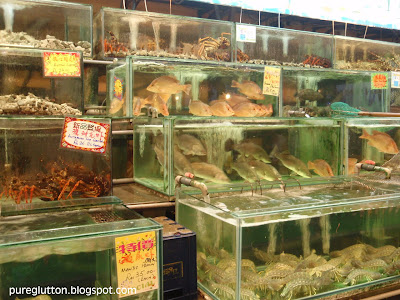 There was a huge array of fresh seafood and vegetables on display – just take your pick! Even the dead ones were very fresh… 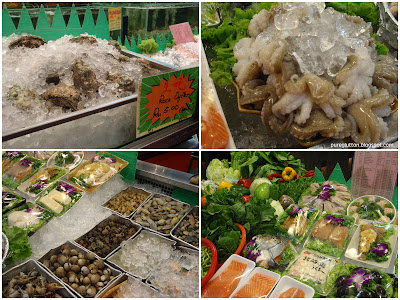 We actually had a hard time picking our choices… 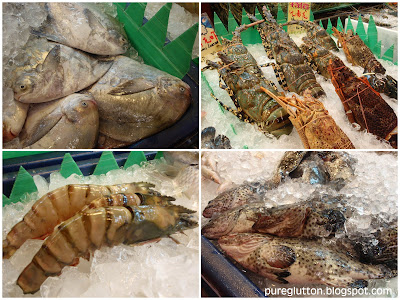 This was the Starter – Cockles, lightly boiled and eaten dipped in their garlic chilli sauce… 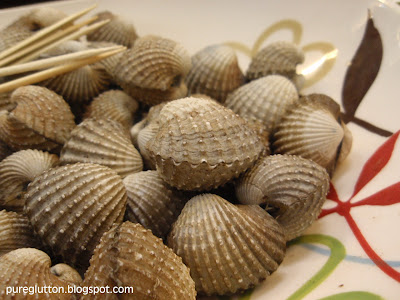 Next came the Baby Octopus…. absolutely divine! Again, we chose the same style of cooking – lightly boiled… the best way to taste the freshness of sea produce … 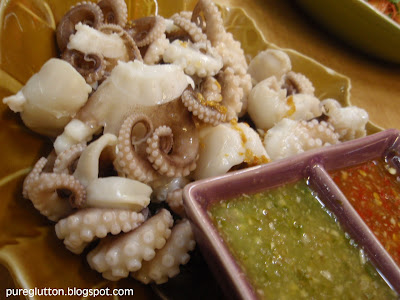 They were tender yet succulent… and when married with the green & red chilli dips – fabulous! 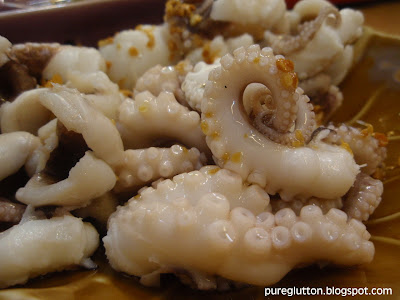 Since the light boiling method worked so well with fresh seafood, we had most of the dishes done that way. You can’t go wrong with this, believe me!

The Tiger Prawns… they were swimming in the tanks before they were served (ok, I’m being gross) … Mmmm… they taste good dipped in wasabe+soya sauce too! 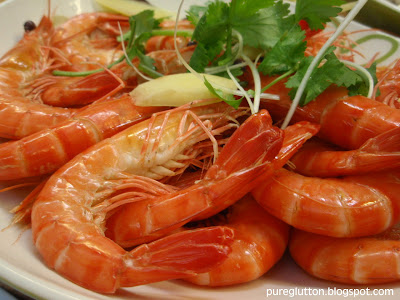 What is a duck but not a duck?

Yeah, sounds kinda lame, I know… but then the Geoduck is anything but a duck! (i wonder who gave that very inappropriate name lah!) 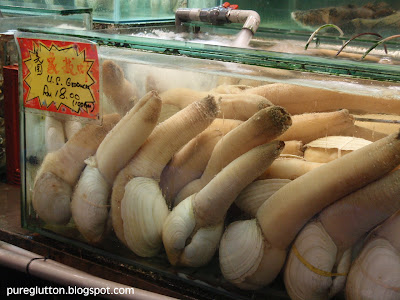 … and it certainly didn’t taste like one!
Known also as the “Elephant Trunk Clam” (direct translation from Cantonese), this saltwater king clam is really one ugly fella. We had this thinly-sliced, served on a bed of shaved ice – eat it either sashimi-style, dipped in wasabe… 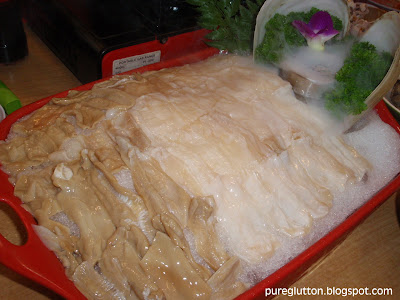 … or dip them in a pot of boiling herbal soup! I tried it both ways and I must say nothing beats eating it sashimi-style – that’s when you can really taste its sweet succulence. It’s slightly chewy, just slightly only, giving that delish bite to it… and then its smooth sweetness just burst upon your palate before slipping down your throat. 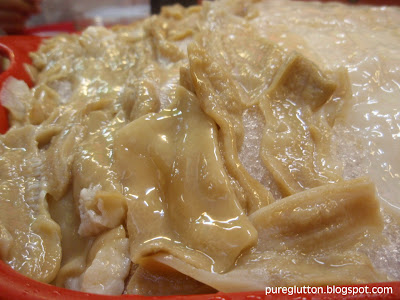 Ahh… let’s take a break from all those seafoody stuff and have some bites of greens… Pea Sprouts was our choice… lightly saute’ed with garlic… refreshingly yummy. 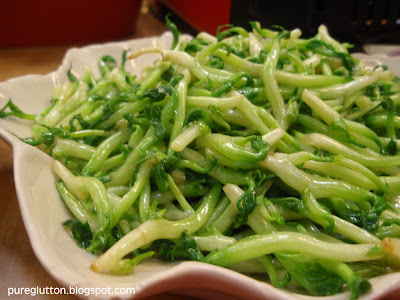 The greens were to cleanse our palate… before the next onslaught. 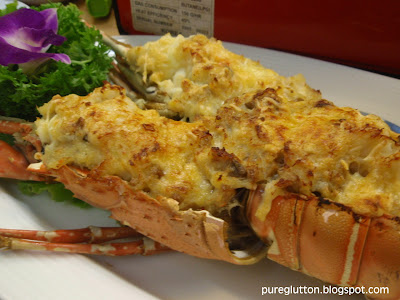 It was a fair sized crustacean… ahh, but then I’m not really a fan of cheese-baked seafood, much to the delight of the boys. “Less man more share” for them! I would have prefered to have this lightly tossed in ginger & spring onions… or even sashimi-style… but hey, the guys love their cheese! Judging from their moans of ecstacy, I guess this scored pretty high marks with them 🙂 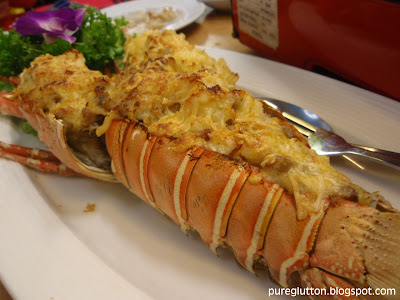 There were 2 disappointing items that night. The Garoupa… steamed with soya sauce… while the fish was fresh, unfortunately the cook left it in the steamer too long, so the poor fish was served overcooked! Quite a serious crime, I would say… coz that rendered the fish kinda chewy and somehow the taste went a bit off. 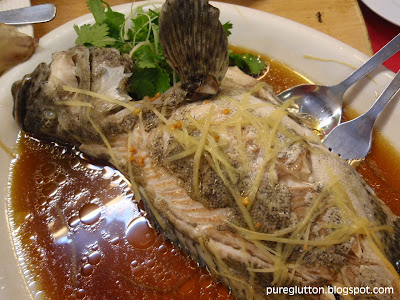 The other big disappointment was the Seafood Fried Rice. LL, who is now an established Foodie, took 1 bite and promptly declared it “no wok-hei!!!” with a grimace. I took a spoonful and totally agreed with that statement. Worse, it was just mildly lukewarm when the dish was put on our table… the rice grains were kinda limp and the shrimps, scallops and anchovies could do nothing to revive the dead rice ….sigh.
Sad. 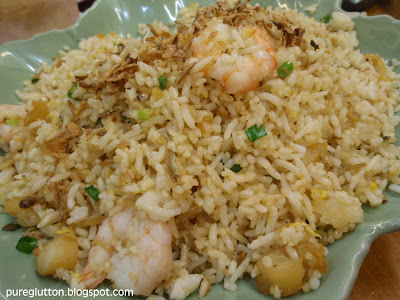 Anyway, by this time, we were all stuffed with the earlier dishes, so even without the carbs, we were pretty happy and satiated, hehe!

The restaurant was very much in the Merdeka spirit… and the tables were really filling up fast as our dinner progressed. What can be more pleasant than digging into seafood, with the sea breeze blowing in, … and if the crowds were to quieten down a bit, I bet you can even hear the waves lapping, LOL! 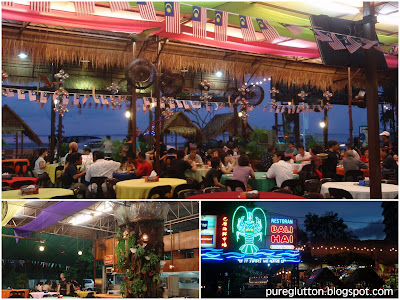 I kinda like their tagline “If it swims, we have it!” even though they didn’t totally live up to it!

Hmmm… I didn’t see any sharks… 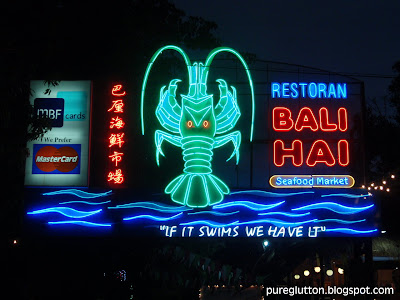