It’s “two OX’, not “20 x” or “20 multiply”.  This latest French bistro bar along Jalan Doraisamy (known as “The Row”) has got many people perplexed over its name, for sure.  The mystifying “2OX” (and yes, the OX must be in caps) refers to Sainy Chun and Thierry Le Baut, the owner and chef respectively. If the names sound familiar to you, it’s because you probably have heard of them at Maison Francaise where they run the show, too.  While Maison Francaise is all about fine-dining, the concept at 2OX leans towards casual bistro dining in an atmosphere which is more relaxed, informal yet retains that element of Parisian chic. The decor is decked in a predominant black and white theme but what injected the fun element is the huge colourful wall painting facing the entrance.  Becoming very much its centre of attraction, the painting depicts a group of diners (presumably Parisians)  in the throes of merry-making. Chef Thierry has curated a focused menu that includes French classic favourites which are friendly to the wallet.  Everything is listed in just one page which makes ordering really easy.  I would say their fares are good value for money, delivering delectable dishes in a cosy and comfortably elegant premise. Shall we start with some wholesome freshly-baked bread?

Spotting piquillo peppers on the menu, I just had to order it as I adore these sweet Spanish peppers.   Chef Thierry’s Stuffed Piquillo Peppers with Beef (RM25) had all the culinary elements to serve these sweet spicy (without the heat) peppers in their distinct presentation.  Stuffed with minced beef, the bright red peppers were roasted and topped with a creamy sauce and digging into them was just bliss. Pork Tenderloin with caramelized onions on Toast (RM30) – the medallions of pork tenderloins were marinated and grilled delicately before being served with sweet caramelised onions and accompanied by crispy toast. The pork tenderloin, together with Chef Thierry’s Pate de Maman (RM40) are perfect examples of traditional homely dishes that are popular with the French.  These simple provincial-style pork dishes are typical food eaten at home cooked lovingly in the family kitchen.  The pork pate had that delicious rustic touch which was best enjoyed with some pickled gherkins and fresh tomatoes. We had 2 more appetizers – the Fusilli Pasta with Rocket Salad, Tomatoes, Peanuts & Pesto (RM22) and the Duck Rillette served with Pickled Gherkins (RM38).  The fusilli pasta was definitely hearty and healthy. We loved the duck rillette – the flavoursome duckmeat was so good when eaten with the toasted French bread and topped with house-made pickled gherkins.  Those crunchy tangy gherkins were pickled according to Chef Thierry’s father’s recipe.  They were absolute must-have’s to accompany the rillette and pate dishes. We took a peep at the kitchen of 2OX and were impressed by its professional set-up and its line-up of state-of-the-art equipment.  The Josper oven stood out with its gleaming doors, just next to the sous-vide boiler.  Chef Thierry was mighty proud of these master-toys and insisted we tried some dishes cooked by them. The first of our mains was the 7-hour Low Temperature Cooked Beef Oyster Blade (RM88).  The slices of oyster blade were fork-tender, infused with its own juices mixed with a variety of herbs.  Hearty and wholesome, those oyster blades would please many beef fans. Just look at how tender the Oyster Blade is!

From the Josper oven, we had their Pork Chop (RM75) and Squids with Fresh Lemon (RM59).  I felt the pork chop was over-cooked as personally I prefer my meat a bit pink in the centre.  Nevertheless as the pork chop was eaten immediately and because it was well seasoned, the slightly-hard texture was forgiveable.   Be sure to inform the level of done-ness preferred when placing your order. Pork Chop from the Josper oven! Fresh squids do not need too much cooking – just a nice blast from the Josper oven was all that’s needed to produce squids that’s evenly cooked with some charred edges while the texture remained tender but with a good bite! The desserts list was not long and we tried most of them.  The Classic Creme Brulee (RM15) was wobbly and creamy beneath its caramelised surface.  The texture was definitely softer than what’s usually served in other eateries. Bourguignon Pear & Vanilla Ice Cream (RM20) – essentially a simple rustic dessert, chunks of pear were cooked in red wine before being served with vanilla ice cream.  Do eat this quickly as the house-made ice cream melts very fast and can turn mushy within minutes. The Lemon Tart Meringue en Verrine (RM15) and Dark Chocolate Mousse (RM15) with buttery crumble were our favourites.  The tangy lemon tart was a good palate cleanser.  The fragrant buttery crumble added a nice touch to the luscious chocolate mousse. 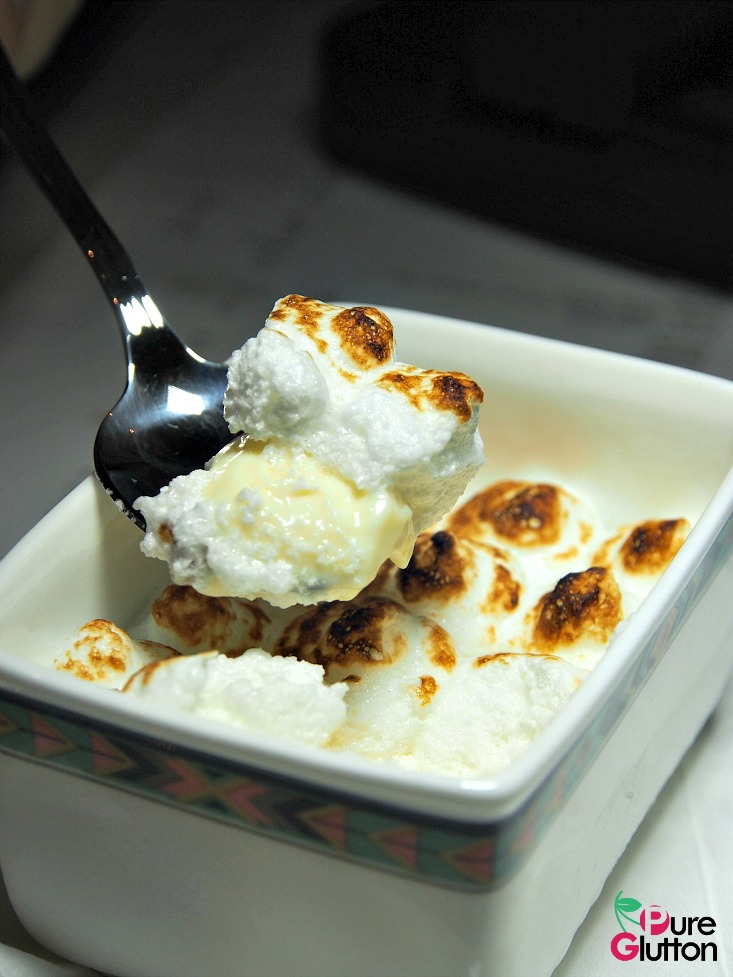 2OX has an impressive line-up of affordable French, Chilean and Australian wines starting at RM20 per glass.

Presently, there is a special promotion where guests can create their own 3-Course Menu at only RM88++ but do note that some dishes require some additional charges.

2OX will definitely be one of the more exciting eateries in KL this year.  There aren’t that many casual dining places serving affordable French fares and in such lovely ambience too.